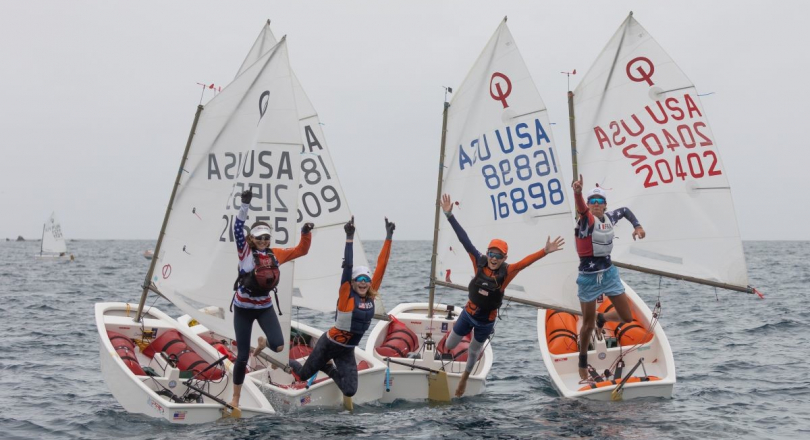 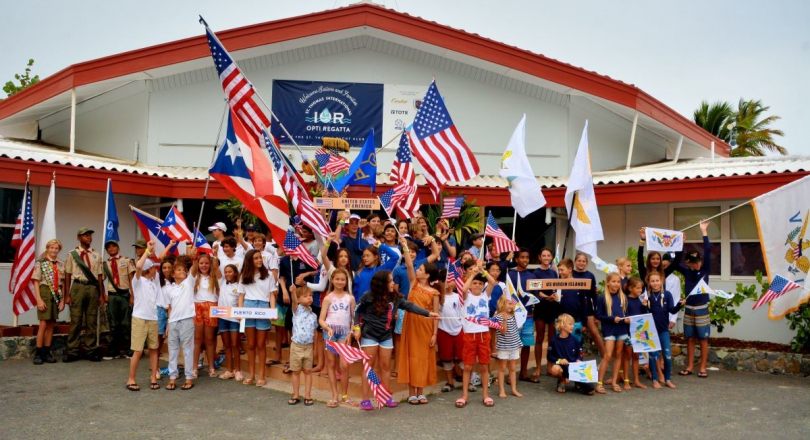 Good starts, getting ahead, and covering competitors proved the winning strategy for Team CRYC (Coral Reef Yacht Club), which won the TOTE Team Racing Championships on Thursday. The Championships are one of a trio of events sailed this week out of the St. Thomas Yacht Club (STYC) and were prefaced by the three-day TOTE Clinic and followed by the 29th International Optimist Regatta IOR), Friday through Sunday.

Over a dozen teams of four sailors each participated in the TOTE Team Racing Championships. In exciting racing, the champion title came down to a best of three contest between two USA teams, both racing under the burgee of Florida’s Coral Reef Yacht Club. Team CRYC Spectra won the first two races, sealing their win. Team members were Will Barnhart, Kayla Benesch, Brayden Zawyer, and Sophie De Leon Urban.

“The racing was tight between us and the other team. It came down to the last legs to determine the winner,” says 15-year-old Barnhart, who captained Team CRYC Spectra.

“I learned how to be more aggressive, to smile and be nice, but to not let the other sailors think that they can just beat me,” says 13-year-old Audrey Zimmerman, from St. Thomas and part of the STYC team, about what she found valuable during the Clinic.

Similarly, 13-year-old Emma Walters, a fellow STYC team member, says, “How to tell where the fleet was going, especially a big fleet like this, is something I learned. Help with starts and overall strategy was good too.”

Zimmerman and Walters are among more than two dozen female sailors taking part in this event. New, the Founders Trophy will be awarded to the IOR’s top female sailor. It’s designed to promote the participation of more young women in this event as well as to honor the IOR’s past top female sailors via a name plaque on the perpetual trophy. The Founders Trophy is the brainchild of two of the event’s five founders, Henry and Fredelle Menin.

“The hardest part was racing against so many other sailors,” says 10-year-old Martinez. “Tactics, strategy and starts, getting those right, was important.”

New this year too was the First Annual Coaches Cup Challenge Opti Race, held on Wednesday. The fun event’s 11 coaches tucked into 8-foot Optimist dinghies and raced around the bay. Local knowledge proved advantageous as the winner was Agustin ‘Argy’ Resano, the STYC’s Optimist coach. Resano’s winnings will be used to support STYC’s Optimist program. The Challenge is sponsored by the non-profit St. Thomas Yacht Club Foundation.

“It was a lot of pressure with all of the sailors and their families cheering us on from the dock, but it was a lot of fun too,” says Resano.

The 29th IOR gets underway Friday. The 94 junior sailors are represented by both Championship and Beginner fleets. The Championship fleet is divided into age groups: White (age 10 and under), Blue (ages 11 and 12), and Red (ages 13 to 15). The race committee plans to run 10-plus races over the next three days, depending on the weather.

The Awards Ceremony takes place on Sunday at 3 p.m. at STYC. Trophies will be awarded to the top five sailors in each fleet: Red (ages 13-15), Blue (ages 11-12), White (age 10 and under), Green (beginners), and the top three sailors overall by score. A Perpetual Trophy, introduced in 2017, is inscribed with the overall winner’s names from the past 28 years. Additional trophies include the Peter Ives’ Perpetual Trophy and the Chuck Fuller Sportsmanship Award. The Sea Star Perpetual Trophy will be inscribed with the names of the sailors on the winning team racing team.

New in 2022, winners in the Red (ages 13-15), Blue (ages 11-12), and White (age 10-and under) fleets will receive signature Virgin Islands’-styled Lite Up Watches from Cardow Jewelers, each in coordinated Red, Blue, and White colors. Perfect for junior sailors, the kid-favorite timepieces are water-resistant and feature a silicon band, flashlight, light-up feature, and an outline of all three U.S. Virgin Islands on the face.

This year’s event will follow an eco-friendly theme. Sailors will be encouraged to recycle all plastic water bottles, use the reusable water bottle in the goodie bag throughout the regatta, keep all lunch bags and wrapping out of the water, pick up any trash on shore and accept drinks without straws.

U.S. Virgin Islands Department of Tourism. The U.S. Virgin Islands are in the Eastern Caribbean 1,100 miles southeast of Miami, Florida, USA. Each of the three major islands–St. Croix, St. Thomas, and St. John–possess a unique character of their own. Visitors can enjoy a wide range of watersports as well as immerse themselves in the territory’s rich culture by enjoying historical tours, culinary encounters, artisan fairs, parades, storytelling, and other special presentations. www.visitusvi.com