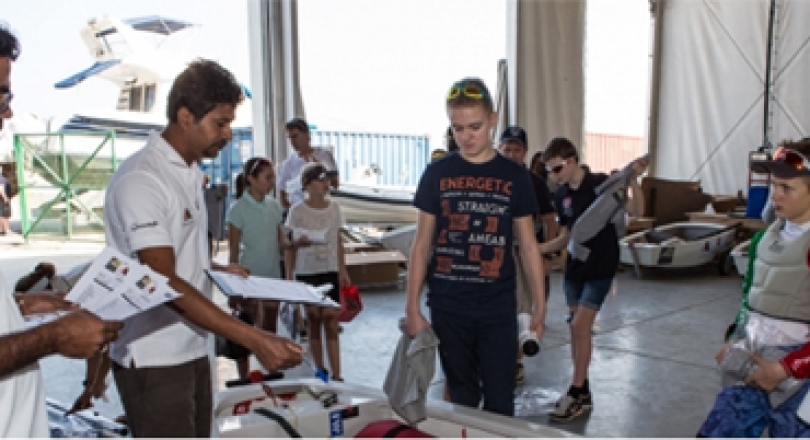 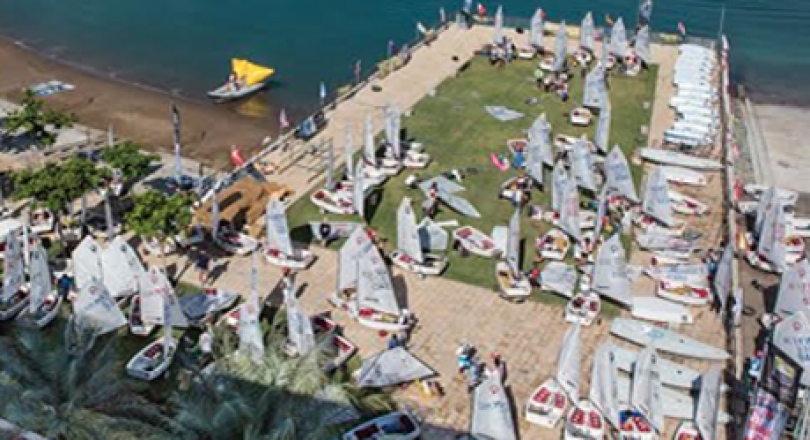 22 January - By the end of six races on Thursday, the largest Optimist fleet ever to be hosted in Asia outside the official International Optimist Dinghy Association championships, was divided into a gold and silver fleet with six of Oman's contingent of 39 fledgling sailors flying the Sultanate's flag in the gold fleet and gunning for overall victory.

At the top of the overall leaderboard is Muhammad Fauzi Shah from Malaysia who is dominating the race track with five wins from six races while Singapore's Daniel Ian Toh and Jodie Lai are close behind, all three visitors enjoying the light shifty winds in Mussanah and the superb conditions.

17 January - Oman Sail welcomed around 112 young sailors from across the world to Mussanah Race Week 2015 today for a week of training and racing at the launch of the first ever Optimist Class Champions League in Mussanah. Flying in from as far afield as Europe, Asia, South America and Africa, the youngsters who are all Optimist Champions in their regions spent their first day settling in to Mussanah Sports City, getting to know fellow competitors and easing into their Optimist Champions League campaigns with an opening coaching session.

Among them are 39 of Oman’s best young home grown sailors, including members of Omani National Youth Squad and selected others from Oman Sail’s Omantel Youth Programme. They include Samiha Al Riyami, one of around 25 girls competing alongside the boys on the race track from Tuesday to Saturday and taking part in the specially developed Corporate Personal Development activities, designed to equip young sailors for successful sporting careers.

In between racing and training, there will be a host of ice breaker activities, including an Arabian Night on 22nd January where camel owners and breeders across Oman will exhibit their best stock in a camel beauty contest for the best pure–bred camels in the Sultanate. There will also be opportunities to experience Camel rides and watch Omani traditional dance performed by professional dancers while a group of Omani handicraft specialists will display traditional ways of making handicraft items that are specific items to Mussanah.

Visitors will be offered Omani Coffee (Qahwa), Halwa and dates as an example of the warm Omani hospitality and there will be plenty of traditional Omani Turbans (Masaar) available to wear and plenty of assistance available in how to wear them.

Salma Al Hashmi, Oman Sail’s Director of Marketing and Events, welcomed the youngsters, their coaches and parents to Mussanah and wished them all ‘fair winds’ for an excellent contest. “We are excited to welcome the world's leading Optimist sailors to Oman, especially to the Mussanah Sports City. This is an exciting opportunity to continue the legacy of the facilities in Mussanah, contribute to inbound tourism and allow our young Omani sailors to race against some of the best sailors in the world,” she said.

“We look forward to some excellent competition and hope the sailors enjoy the activities that will take place both on and off the water.”

The first three days of Mussanah Race Week will be spent in coaching and Corporate Personal Development activities before racing starts on Wednesday 21st january. The action continues through to Saturday when the event closes with a special prize-giving.