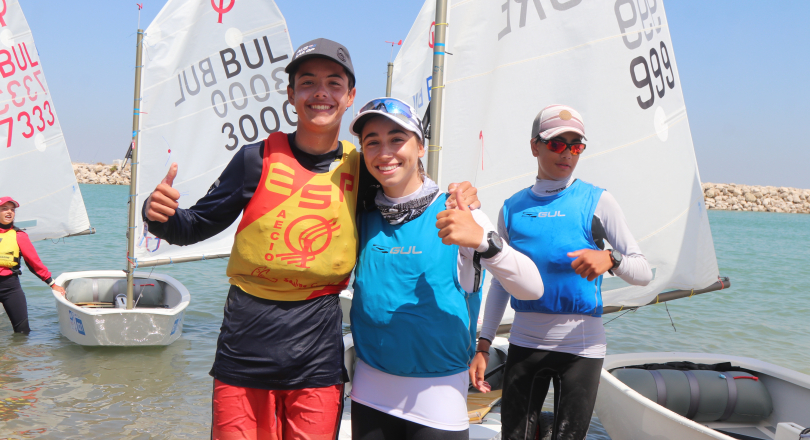 Xavier García Olle (ESP) and Kleopatra Anastassiou (GRE) are the 2021 Optimist Boy and Girl European Champions after a fantastic week of racing in the Bay of Cadiz and first-rate organisation on-shore.   The wind did not disappoint today with a southerly breeze at an average of 15 knots kicking in for the last two races.  During the week, the starting signal has sounded around 50 times for the ten races to be completed as scheduled for each group.

It was a real fight to the end in the girls’ fleet, where Kleopatra Anastassiou (GRE) took the title in the tenth and final race. After moving up to third place in the penultimate race with a 3rd and an 8th, the lack of consistency among her rivals allowed the Greek sailor to be proclaimed the 2021 Girls Optimist European Champion. She finished three points ahead of Medine Tras (TUR), who was one point ahead of Sofía Bommartini (ITA) in third place, followed by Firdevs Yegin (TUR), who saw the title disappear out of her reach on the last day.

The final day was a mere formality for Xavier García Olle (ESP), but he still won one of the final races and continued to shine as he has done right from the very first race. The sailor from RCN de Palma finished 1st and  4th in the two races today and has taken the title with over thirty points ahead of Niccolo Pulito (ITA), who played a good endgame to finish 2nd. Alexandros Kyfidis (GRE) is the last member of the podium, who managed to use the tension between the other sailors to take bronze, with two points less than Carlos Espi (ESP), the only other Spaniard in the Top 10.

All the sailors deserve our applause as the sea and wind conditions have been challenging throughout the week. And it ends with two new European champions. It has been a close-fought fight among the girls, in a highly competitive fleet that has clearly showcased the huge talent among the young sailors worldwide.