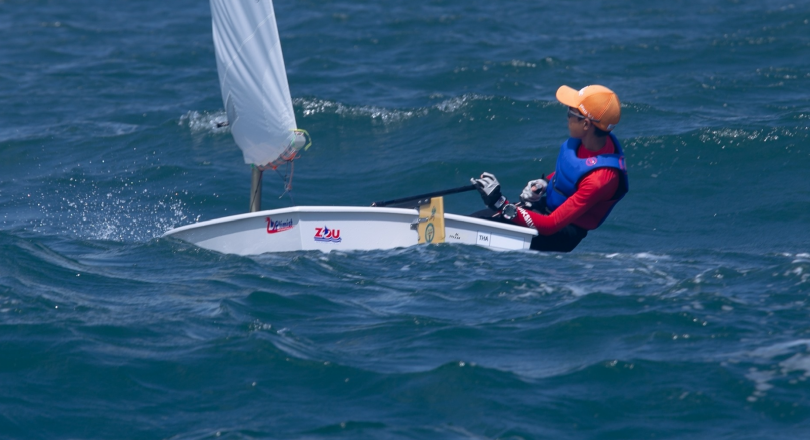 In an exciting final day of racing at the 2021 Optimist Asian & Oceanian Championship, lighter winds in the first race saw new names appear at the top of the fleet, stronger winds in the second race a batch of other names, only four of the top ten managing top ten finishes in both races.

Among the surprises in the first race were Thailand’s Thanapat Sirichaoren who won, Turkey’s Kutsal Gunes who finished 2nd, India’s Eklavya Batham who was 5th, and American girls Amelon Rule and Eliza Corral in 6th and 8th place based on preliminary results. In the second and final race, three Singaporeans - Zach Low in 2nd, Nicole Lim in 4th, and Ethan Chia in 8th (before disqualification for an incident) - plus two Thai girls - Noppassorn Khunboonjan in 8th and Patcharaphan Ongkaloy in 9th - swept into the top ten.

While Weka and Turkey’s Ege Erdemli held onto their first and second places overall, third place was reclaimed by the USA’s Wylder Smith from Thailand’s Chanatip Tongglum who finished in the 20s in both races. Japan’s Soshi Fujita finished an impressive 3rd in both races of the day, climbing to 4th overall, with Chanatip end the regatta 5th overall.

“It was wonderful weather and wonderful conditions to end the regatta,” according to sailing commentator Alex Frefel. “It was a very tough first race with light wind and a strong current, replaced by big swell and 10-13 knots to end the day.”

He saw clusters formed on the legs of the race, with sailors using the downwind to cover others wind. Most sailors picked up on the success of others choosing to go further out in the first race when some must have been loving the light wind, others not. The final race saw a few protests and commotion, as well as a very crowded finish.

“The racing ended with waving and happy faces all around,” he said.

Panwa, who is now in the ILCA 4 class, sent a message to all 64 sailors at the event and those who could not make it: “It is normal in any sport to have ups and downs. Don’t feel discouraged or frustrated. Don’t feel like giving up. Think about solutions and how to sail well again. Prepare. When you improve your sailing and racing skills, don’t mock those sailors you beat. Show sportsmanship. Congratulate those who win and encourage, give comfort to those who do not.”

The regatta ended with a closing ceremony and prize-giving, trophies given out as below:

Top 3 Overall Regardless of Residence or Gender