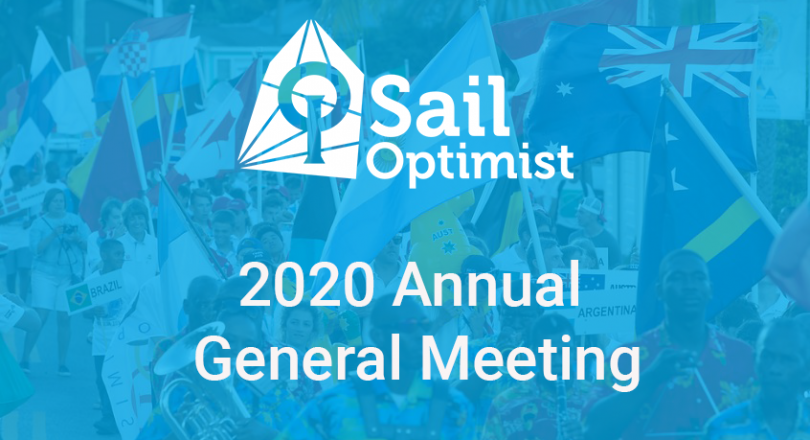 Due to the Corona-19 pandemic, IODA held their Annual General Meeting virtually on Thursday, October 22 during the 2020 Optimist European Championship in Portoroz, SLO.

Although the intention was to host a hybrid virtual meeting, the Slovenian Government Health Authorities began tightening the COVID restrictions as this region of Slovenia moved from orange to red. These actions ultimately resulted in the European Championship finishing one day earlier than scheduled.

Although it is always nice to meet our members face-to-face at a normal AGM, we had a record number of 65 members online for the virtual AGM, plus two honorary members as well as the former IODA Secretary Robert Wilkes listening in on the meeting.  In total, over 100 people registered for the IODA AGM.

Logistically, holding a virtual AGM was more challenging than normal due to the number of moving parts.  IODA used the mi-voice voting platform, throughout the meeting for all items that required a vote.    The team headed up by Simon Thomson at mi-voice did a outstanding job handling the voting throughout the meeting, in particular the few complicated proposals that came from the floor.  To find out more about the mi-voice platform, you can go here.

Reports were presented by the President, Vice Presidents, Technical and Regatta Committee Chairs and the Treasurer on the activities and accomplishments of the past year.  Here are some of the highlights from the President, Kevin Whitcraft’s report:

Challenges that face the class in the immediate future is COVID 19 and how it could possibly disrupt our IODA events again in 2021. We have only been able to host one IODA championship this year so far. COVID 19 has had a devasting effect on the industry and builders are not producing many boats and sail makers are also experiencing a low demand in new sails.  As a result, our revenues are down considerably in 2020, so we are trying to do more with less. We are hopeful that the battle with COVID will subside in 2021 and that Optimist activity will stabilize and the manufacturing and sales of plaques and boats will increase.

In terms of the decisions that were made at this AGM, they were primarily focussed on the effects of COVID 19 on our IODA Championships in 2020 and 2021. It is the members of IODA who decide where our championships take place each year, so changing a venue required 2/3 majority to be approved. The following two proposals were approved by the members:

A major component of the AGM is the confirmation of our 2021 events for next year.  The following 2021 IODA Championships were confirmed by the members:

The 2021 African Championship, Dar es Salaam, was withdrawn shortly before the AGM, so we are looking for a venue for the African championship next year.

In addition, the selection of the 2022 IODA Championships took place.  They are:

Many proposals were presented regarding the Championship Conditions and Articles of Association. The results of voting will be included in the Minutes of the Meeting.  Also approved by the members were three class rule amendments that will now be submitted to World Sailing for approval.  If approved, they will come into effect on January 1st and will be included in the 2021 version of the Optimist Class Rules.

We would like to thank all of members for attending the AGM and for exercising your right to vote in the future direction of the Optimist Class.  Your participation along with the many observers that attended indicates that the Optimist Class is very much alive and well.