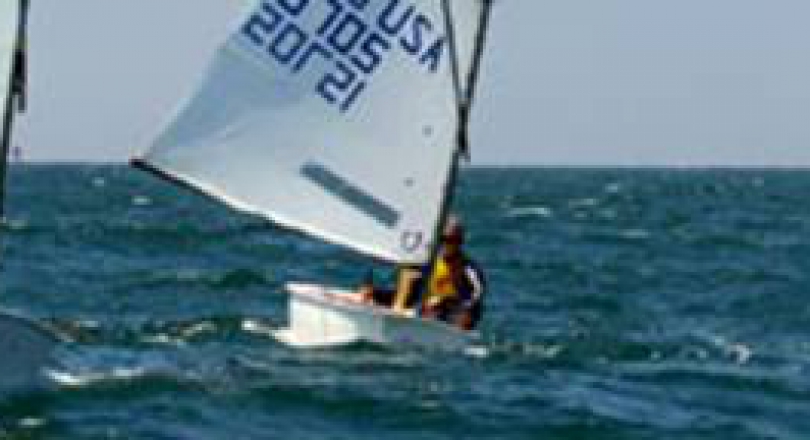 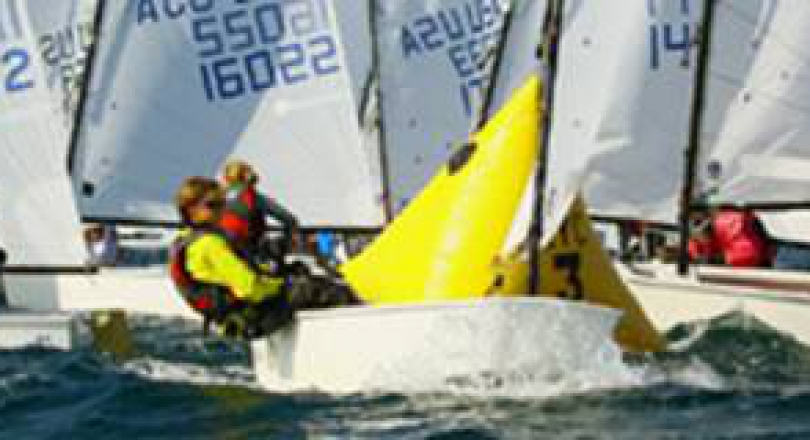 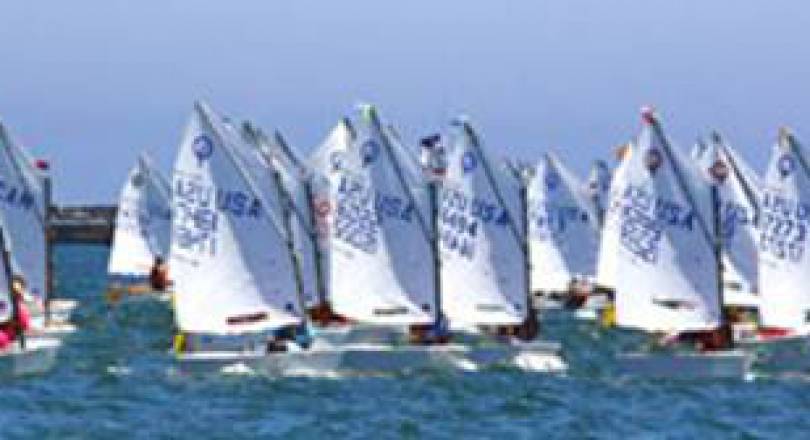 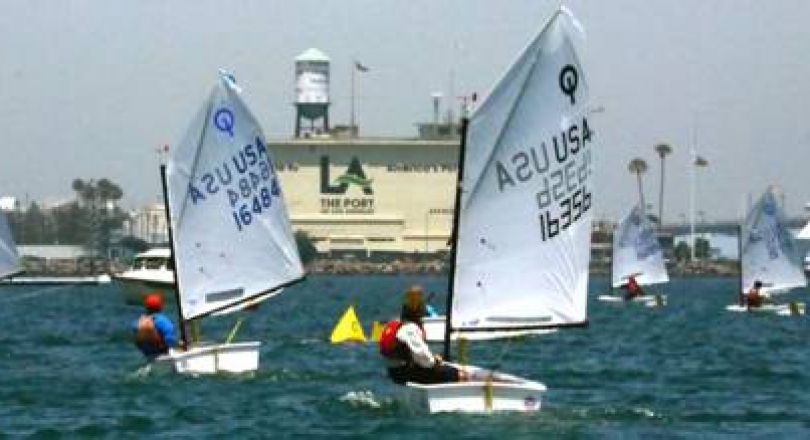 Both Sly and Williford will be competing in the Optimist Worlds in Brazil starting 4th August.

There were 171 competitors when the US Optimist National Championships started 10 races ago, but it's a three-boat battle for top honors going into the fourth and final day of the regatta hosted by the Cabrillo Beach Yacht Club Sunday. Axel Sly, had a seventh place, his worst finish of the regatta but followed that with three runaway wins to stay on top with 16 points to 33 for defending champion Christopher Williford and 36 for Malcolm Lamphere.

There probably will be only two races today, although three would be possible if there were to be no delay waiting for wind, which has been the case the first three days. The two fleets have been scored as one, but Sunday the top 80 boats will be reassigned to the Gold-Silver fleet to sail for the top prizes. The 40th-place boat will win the Silver title. All the others will compete in the Bronze-Pearl group.

Shifting the sailing in the US Optimist National Championships from protected waters to the added challenges of the open ocean has proved a challenge for some but not for defending champion Christopher Williford and Axel Sly who were in their element here yesterday. Their nearest rivals were yet another Sunshine Stater, Nic Muller, 12, of Ft. Pierce, and Holly Tullo, the 15-year-old from  Staten Island,  N.Y., who won the Girls  Championship a day earlier. Each has 21 points.

Principal race officer Bill Stump would have liked to run four races, but unusually light and fluky air delayed the start of racing for an hour. Once racing started, a large problem for many was a strong downwind tidal current, which had not been a problem inside the breakwater for the Team Racing and Girls Championship. Today it was a nightmare at the two windward marks, causing chaos for about a third  of the racers who played the layline too fine and wound up either embracing the inflatable marks, an offense whistled by the on-water umpires requiring a penalty turn, or having to do two extra tacks to get  around at all.

Racing ended at about 5:30 p.m. Stump hoped to run three more races on Friday, six total would kick in a discard option and proceed into the last two days with the fleet realigned into two groups: Gold for the top scoring boats and Silver for the others.

Holly Tullo, 15, from Staten Island, N.Y., showed a lot of peers how it's done Wednesday when she won the Girls Nationals phase of the US Optimist National Championships hosted by the Cabrillo Beach Yacht Club.

Holly was a runaway winner and the only one to score single-digit finishes (5-4-1-9-2) in all five races. Her 21 points left her 14 points ahead of the runnerup, Adele Whitmyer, 12, of Stamford, Conneticutt. Four other girls scored the other wins: Ceci Wollman, 11, from Bermuda; Megan Grapengeter-Rudnick, 14, Darien, Conn.; Haddon Hughes, 12, Bellaire, Texas., and Sarah DeSilva, 13, Kansas City, Mo.

The westerly sea  breeze that greeted contestants in the three-day Team Racing phase of the  event hosted by the Cabrillo Beach Yacht Club settled into a steady 10  knots through mid-afternoon and reached 14 knots late in the day.

In only their second such regatta, five California youngsters known as West Side won the Team Racing phase of the US Optimist National Championships Tuesday.

They swept their 14 races in the preliminary round robin through the entire fleet Sunday and Monday, and then won all four of their semifinal matches in the Gold group of Tuesday's sailoffs.

Their only loss was to third-place Long Island Sailing Optimist Team (LISOT) in what should have been the start of the championship match, but that was scrubbed because the round could not be completed.

There are 332 entries in the three phases of the Nationals hosted by the Cabrillo Beach Yacht Club. Racing continues Wednesday with the Girls Nationals, to be followed Thursday through Sunday on a race course outside the Port of Los Angeles breakwater. All other racing will have been inside. Racing is scheduled to start at noon each day, conditions permitting---and conditions have been good so far with winds ranging from 9 to 15 knots each day since Saturday.

Despite that, the Team Racing fell short of completing its sailoffs because of a rule in the Sailing Instructions prohibiting a race starting after 3 p.m. local time, so there was no final showdown as planned. Instead, the title was awarded to West Side on the basis of its 4-0 semifinal score.

Visit the event website for more information and results