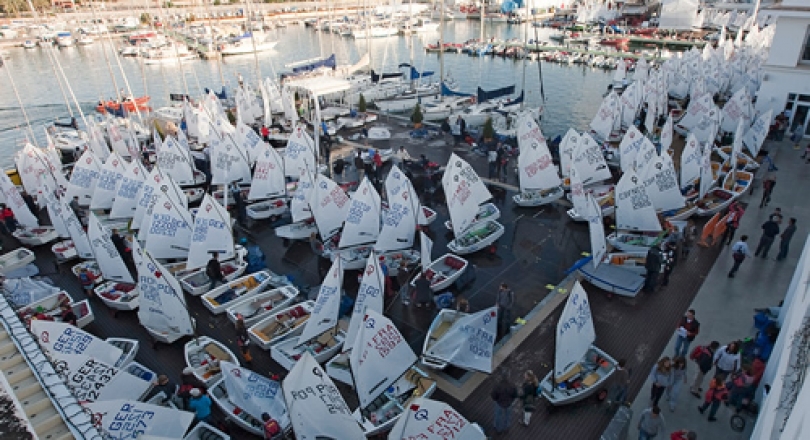 With the aim of promoting dinghy sailing through 'non-olympic' classes like the Optimist, 420 and Europe, the Real Club Nautico de Palma has included the Trofeo Ciutat de Palma as one of its four main regattas, together with the Copa del Rey, Princesa Sofia and Palma Vela.

The continuity and success of this event over the years has been primarily due to the high level of sailing, the large number of participants and an excellent organisation which involves around a hundred people working both on and off shore.

This year the event attracted approximately 600 sailors from every corner of the world, who participated in Laser 4.7, Laser Radial, 420, Europe and Optimist, which was as always, the star of the event.

The first day of the 59th edition of the trophy, the Bahía de Palma was blessed with wonderful sailing conditions, with winds in the range of 10-12 knots and just a slight swell. The 350 Optimists were grouped into three fleets, all sailing in the same racing area and were an impressive sight.

For the second day of the regatta the sailing conditions were once again perfect with winds reaching 14 knots. All classes sailed another three races, which meant that the first discard could be applied.

The last day of racing saw more excitement and also some anxiety as the wind was very shifty. In these varying conditions the Optimist sailors managed to complete only two more races.

Carlos Robles, the present Spanish National Champion, was first overall. Runner up was the German sailor Marvin Frisch who climbed up in the ranking at the last moment, leaving Silvia Mas from Spain in third place. Fourth place went to Jan Marten, also from Germany, and Victor Casas from Switzerland was fifth.