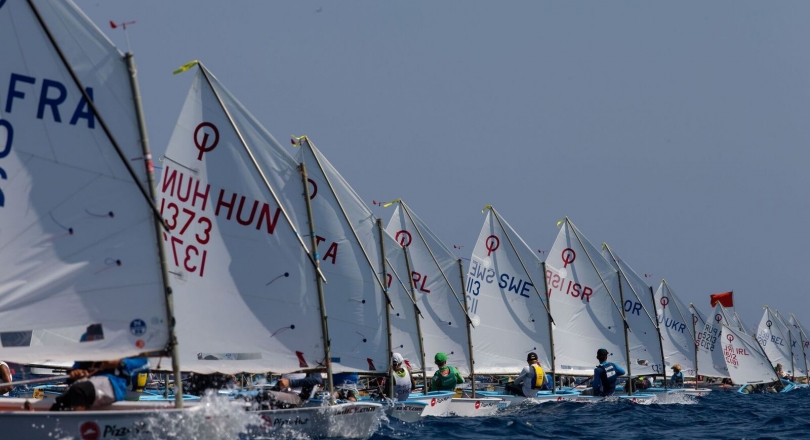 The Qualification Series is complete at the 2018 Optimist World Sailing Championships, taking place in Limissol, Cyprus.   After the completion of 6 races the 258 sailors from 58 Nations have now been sorted into the Gold, Silver, Bronze and Emerald fleets.

On top of the leaderboard at this point in the championship is defending 2017 Optimist World Champion Marco Gradoni(ITA)  with six  1st place finishes.

Marco has been competing neck and neck with Stephan Baker(USA) the 3 time Optimist North American Champion for the past 3 days.  They were first and second going into today’s racing but Stephan’s  12th place finish in the first race of the day  pushed him back to 3rd overall and tied in  points with Panwa Boonnak (THA) who is lying in second.

These are the top Optimist Sailors in the world and each has qualified to be at the event. The top 5 boats are only 9 points apart, which indicates just how tight the racing is.  There is no chance for error.

Only one point behind Baker in fourth place overall is Richard Schultheis(MLT) followed by Tommy Sitzmann (USA) in 5th.

The stage is now set for the final series to start in two days time after 48 nations go head to head in the team racing part of the World Championship.