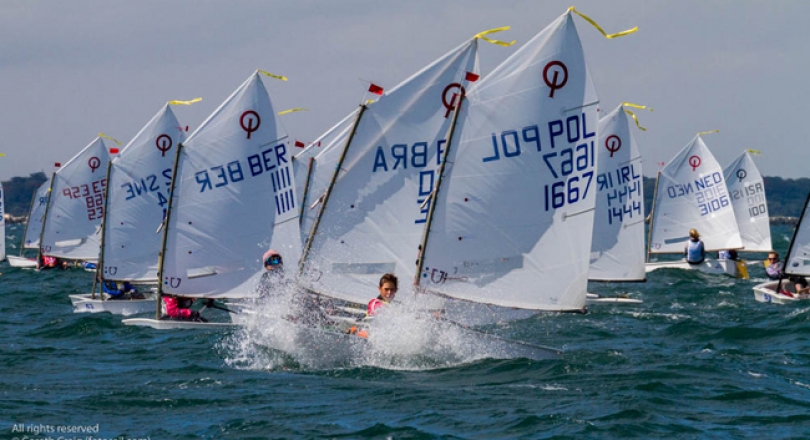 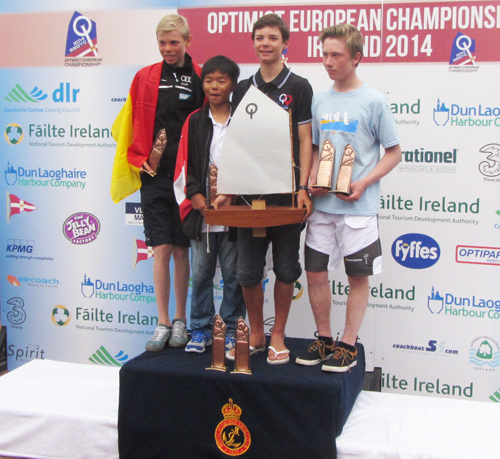 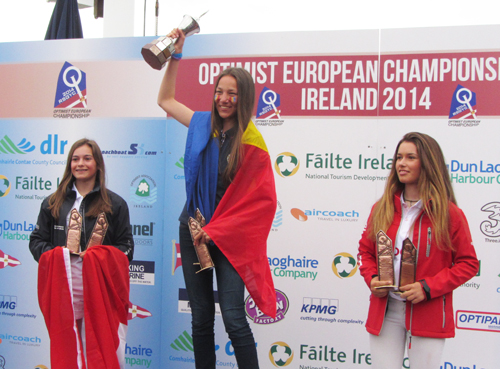 Once again fog has caused racing to be abandoned so the results of yesterday are now final.

Yesterday’s fog was succeeded by what in Ireland is called a soft day ­drizzle and mist­ but at least there was reasonable wind. The new conditions clearly did not suit many of the sailors on the overnight leader board with the notable exception in the girls’ Gold fleet of Ebru Bolat,from Romania. In the top pack from the start, on the shifty final beat she and Pia Dahl Andersen (Norway) broke free on the right hand side and Ebru finished 2nd. She is now sure of a medal with a 26 point lead and her only rival for Gold, Spain’s Iset Segura, must come in the top two tomorrow to win the event. Martina Müller (Switzerland) remains in Bronze position but the group behind her is very close and includes Alexandra Stalder (Italy), renowned for having won the 850+ boat Garda Meeting in 2013, currently in fourth place.

Defending Champion Mara Turin (Slovenia) who had started a comeback yesterday but had a disappointing day today, may still finish on the podium place but retaining the title seems all but impossible now. 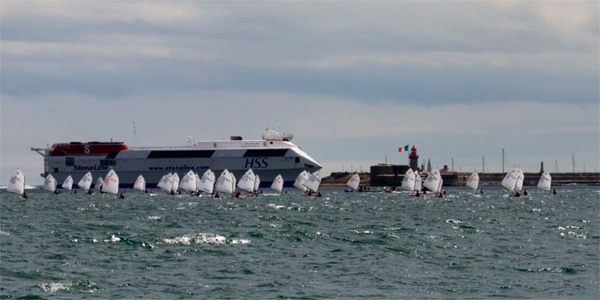 The Stena ferry forms a backdrop for the racing today © Gareth Craig.

In the boys’ Gold fleet leader Enzo Balanger from Guadeloupe, sailing for France, sailed his discard in 20th. He is still ten points clear of his main rival Kasper Nordenram (Sweden) but the main beneficiary of the new conditions were Daniel Toh of Singapore who won the race and Lennart Kuss (Germany) who is now in fourth place.

Last years winner, Tytus Butowski (Poland) is currently in fifth place, remains 17 places off bronze place but he is still fighting for a podium place with a bullet in the last race today.

After the first race the sea fog returned and the wind increased to 18-20 knots. The Race Committee got Silver boys and girls away but the boys Bronze race was abandoned at the windward mark due to very poor visibility. All sailors then returned to shore.

Tomorrow is the final day with just one race planned for Gold and Silver and 2 for Bronze.

The first day of Final Series proved to be a difficult on, particularly for the Race Committee. The day began sunny and warm but sea-fog drifted in and not all the scheduled races were completed. 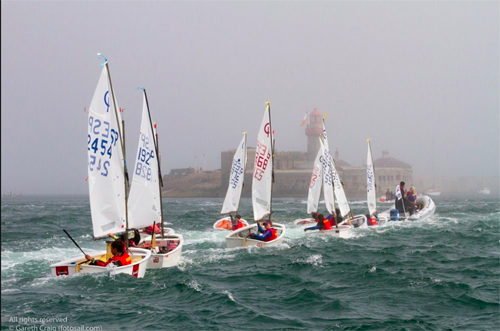 Coaches shepherd the boats home as the fog closes in © Gareth Craig.

All fleets had one race in good race conditions, with 7 to 12 knots of wind. The sea fog then arrived and both gold fleets sailed a course shortened at the gate by the Race Committeea due to poor visibility. Silver fleets (boys and girls) and bronze fleet were unable to complete any further races. 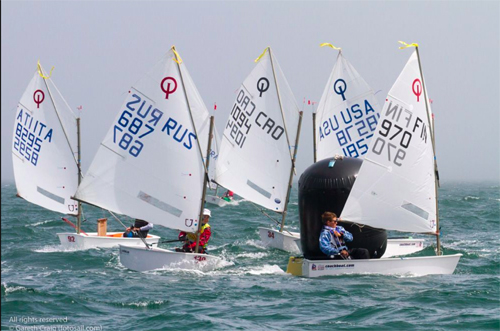 The tracking proved invaluable today as the organisers used it to confirm the whereabouts of all sailors as the fog became more dense. There are another 2 races for each fleet scheduled for tomorrow, the penultimate day.

Two further races were sailed today to give six so far. The sailors are now split into fleets of roughly fifty each: Gold, Silver and Bronze for the boys and Gold and Silver for the girls. At this point too, the worst race result is discarded which has resulted in many changes to the rankings.

The girls‘ fleet had multiple general recalls and black flags today which was particularly frustrating for the race committee. Iset Segura from the Catalan club of Arenys de Mar extended her lead with another win and now has a nine point lead over Ebru Bolat of Romania. 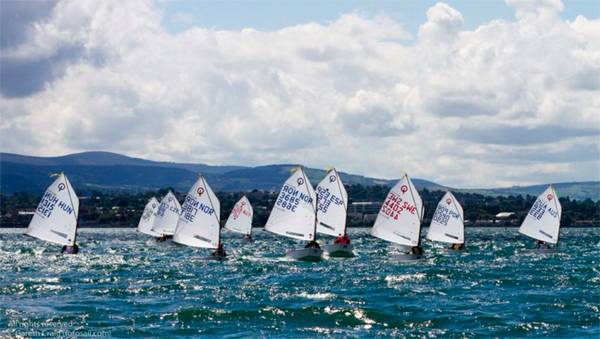 Reigning European Champion Mara Turín of Slovenia is making a valiant effort with two wins today to recover from her disappointing Day 1. She currently lies 10th but it will take some remarkable sailing to retain her title as there is no second discard in this series.

Dublin Bay offers challenging sailing conditions and the steep learning curve of the 254 young sailors at the 2014 Optimist European Championships has led to some dramatic changes in positions.

The new leader of the boys‘ event is Kasper Nordenram of Rôrviks Sailing Club (on a lake in central Sweden). Competition at the top of the fleet has grown very close with Kasper leading from Enzo Balanger from Guadeloupe, sailing for France, and Pablo Lujan of C.N. Javea, Spain.

In the girls‘ event Iset Segura from the Catalan club of Arenys de Mar leads with a win in Race 3 and a lead of 20 points over the overnight leader Josefine Akesson (Sweden). Brazilian Olivia Belda and Ebru Bolat of Romania are next, within a point of each other.

The lighter more consistent winds of today saw changing fortunes for many sailors in the two races today. Racing resumes tomorrow with another 2 races planned. 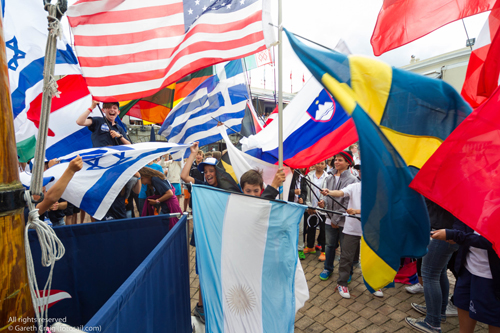 Yesterday, young sailors from 44 countries attended the formal opening of the European Optimist Championship. The 253 sailors with their coaches and team leaders walked in a colourful procession from the Royal Marine Hotel, where most of them are staying, to the Town Hall where they were greeted by an Cathaoirleach (‘mayor’ for our visitors) Marie Baker. Many of the teams will have been encouraged by the presence of the ambassadors of their countries, those from Argentina, Austria, Belgium, Brasil, Bulgaria, Canada, Denmark, France, Great Britain, India, Netherlands, Norway, Romania and the deputy chef de mission of Russia. 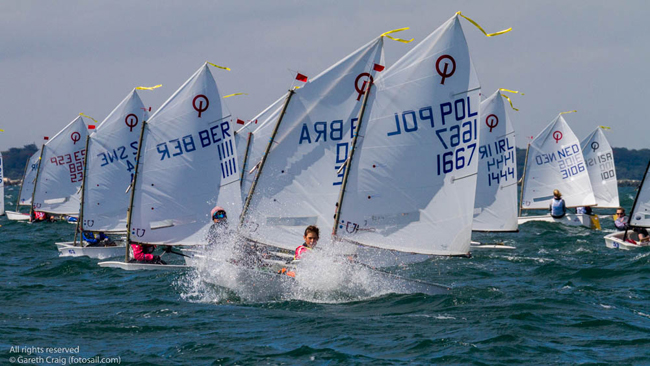 Today the races began. The boys and girls sail in separate fleets and by this coming Saturday, one boy and one girl will become European Champion. There are 151 boys competing, divided into three fleets and 101 girls split into two fleets.

Racing began for the boys in about 4-10 knots with chop and big wind shifts. Their second race saw an increase to 15-18 knots with half meter seas and many sailors capsizing in the gusts of 25 knots. The girls started later in the day and for them it was particularly testing with a consistent 18 knots and gusts up to 24 knots. Their second race was even harder with gusts increasing to 28 knots. There were some very tired sailors in the boat park tonight.

Replays of the racing action can be watched here.

Another 2 races are planned for tomorrow and the tracking will be live, starting at 12 noon.