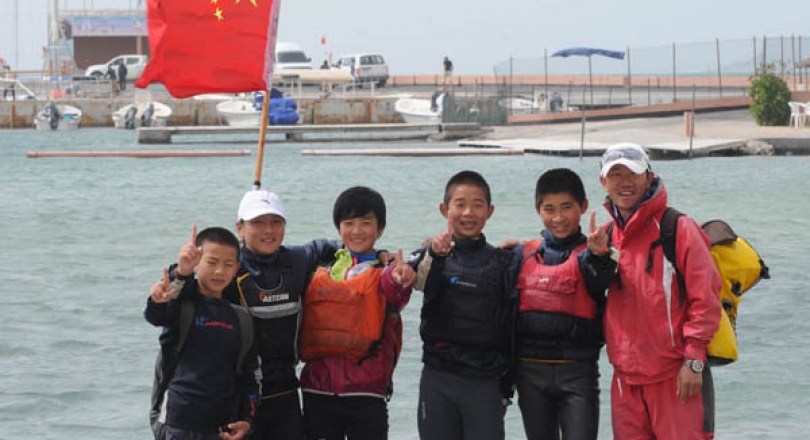 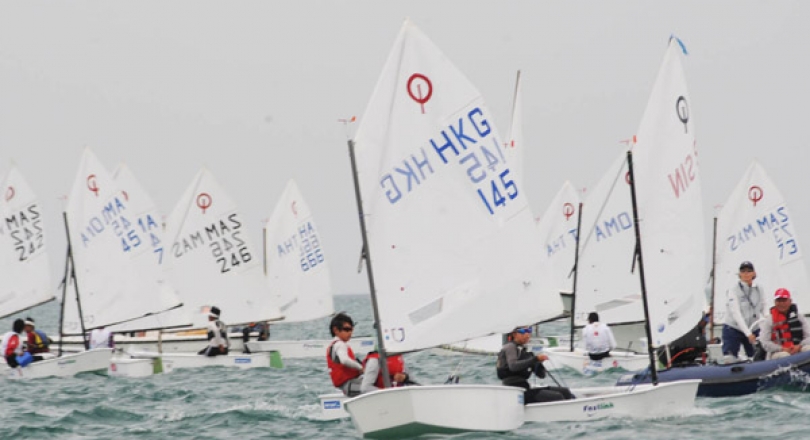 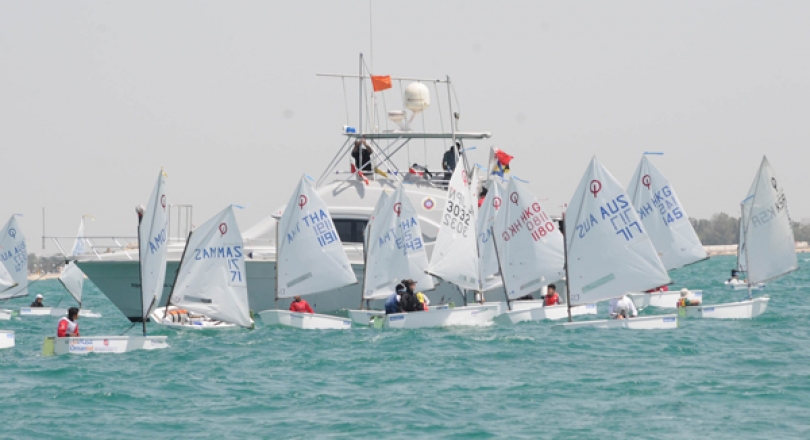 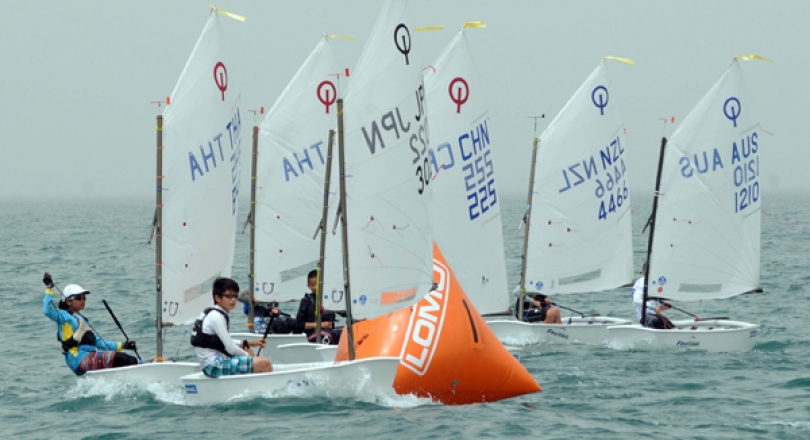 We congratulate team China who yesterday were crowned team racing champions after a tough final against Singapore. 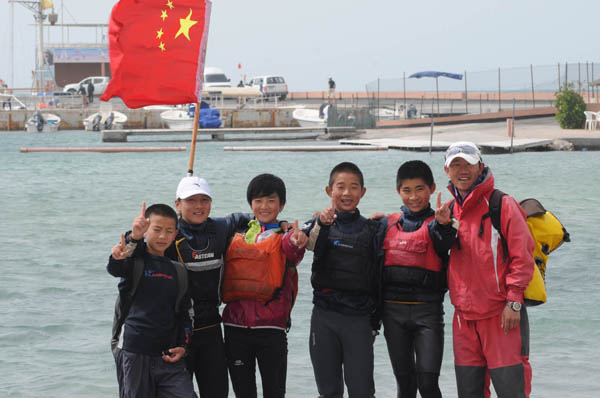 Today the fleet racing continues where sailors from Thailand and China continued to dominate on the third day of the Optimist Asian Championships 2014, being held at the Bahrain Sailing Club’s Al Jazayer Beach in Zallaq.

After 5 races China’s Yu Huijia tops the rankings closely followed by Yampinid Master Sulton from Thailand, with a point separating the two. Yampinid had a tough battle today against his countryman Rachrattanaruk Voravong, who dropped down to third with 14 points, and ahead of Chinese Wang Jie (17 points) who moved up to fourth.

Meanwhile, Bahrain coach Zuhair Al Labat said he was satisfied to see 70 per cent of his sailors have successfully completed their races, taking into consideration their relatively short sailing experience of just three months. Al Labat said this championship has revealed some new talent within the Bahrain national teams. Al Labat added that Bahrain members will resume training after the Asian Championship to prepare for the Arab Games, to be staged in Lebanon in 2015.

Thailand coach M. Sonan said he was pleased with his sailors’ overall performance and hopes they will consolidate their performance during what is left of the Championship. According to Sonan, the Bahrain event represents a crucial step for his nation as they prepare for this year’s Optimist World Championship in Argentina from October 20 to 31. 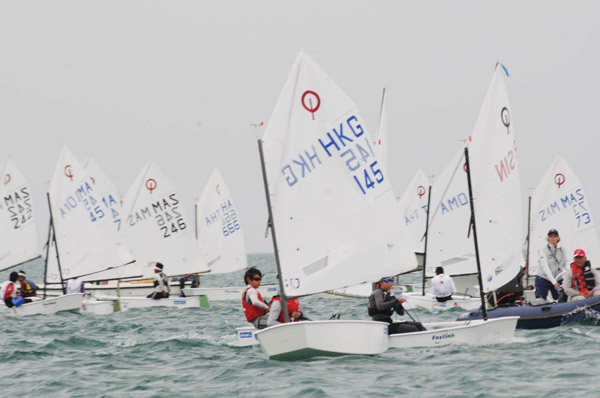 Sailors from Thailand, China and Singapore ruled the second day of the Optimist Asian Championships 2014 at the Bahrain Sailing Club’s Al Jazayer Beach in Zallaq. After tough weather conditions forced the cancellation of most of the races on day 1, the weather improved today and both fleets have now completed 5 races.

Overall standings from both fleets see Yu Huijia of China holding first position with 11 points, followed by Suthon Yampinid and Voravond Rachrattanaruk, both of Thailand in close pursuit. The top 10 positions include 2 of the Chinese Team, 3 of the Thai Team and 4 of the Singaporean Team. 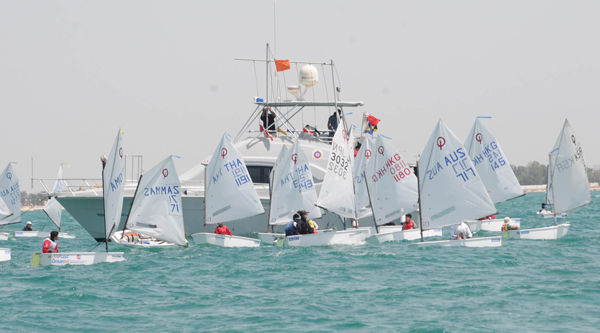 The races were well organised by the race committee and marshalled by members from the Bahraini Royal Marine Forces and the Coast Guard, who also have significant roles in guiding media representatives ­ including Bahrain TV Sports Channel crew ­ to provide daily coverage of the championship from a place near the races area.

Today sees the start of the Optimist Asian Team Racing Championship for which 16 teams will compete. Fleet racing starts again on April 4. Racing action continues until April 5, when the finals and the closing ceremony will be staged at the Bahrain Sailing Club.

After completing 2 races today for the yellow fleet and 1 for the blue all other racing was cancelled due 180 degree wind shifts and gusts of 25 knots. After these few rounds of races the clouds increased and south-easterly winds prevailed, which caused blowing dust and poor visibility. The organising committee, headed by Bahrain Maritime Sports Association president Shaikh Khalifa bin Abdulla Al Khalifa, is expecting slightly better weather tomorrow. 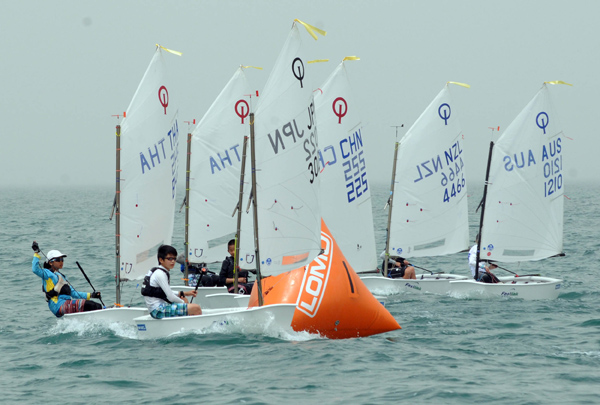 Races will hopefully continue without interruption until April 5, when the finals and the closing ceremony will be staged at the Bahrain Sailing Club.

The tracking will continue to be available HERE

The Optimist Asian Championships 2014, organised in Bahrain, have begun with a colourful opening ceremony at Amwaj Islands’ the Lagoon in Muharraq.

Organised in cooperation with H&H Media, the opening ceremony was attended by numerous sailing fans and featured a variety of activities. Organising committee head Bahrain Maritime Sports Association president Shaikh Khalifa bin Abdulla Al Khalifa spoke at the event, in which he extended his sincere appreciation to Shaikh Nasser and Askar for their support to the championship, which takes place in Bahrain for the first time. 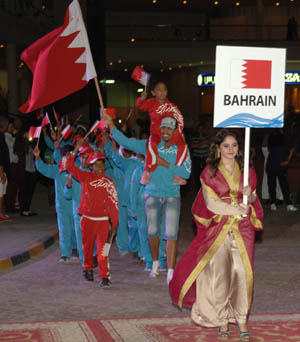 More than 120 sailors from 21 countries travelled to Bahrain for the week-long event, being organised by the Bahrain Maritime Sports Association under the authority of the International Optimist Dinghy Association 〈IODA〉. Races are scheduled to commence tomorrow and will run for six consecutive days at the Bahrain Sailing Club’s Al Jazayer Beach in Zallaq with a maximum of four races scheduled each day. 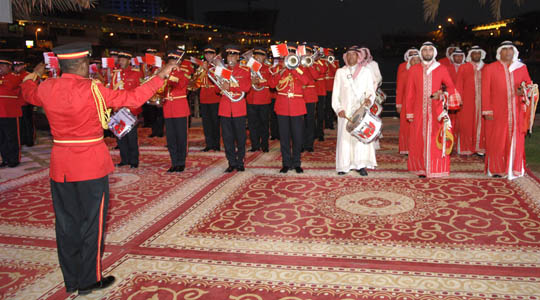 The closing ceremony will be staged at the Bahrain Sailing Club at the end of the final fleet races, then the teams are scheduled to depart Bahrain on April 6. Countries taking part this year include regional nations Saudi Arabia, Qatar, the UAE, Oman and Bahrain, while other Arab countries in the fray are Morocco and Libya. Most of the remaining sailors have come from Asia ­ Australia, Taipei, China, Hong Kong, India, Japan, Malaysia, New Zealand, Singapore and Thailand, in addition to entries from the US, Germany, Monaco and Turkey.

Today sees the first day of the Optimist Asian Championship 2014, in Al jazzier Beach, Bahrain. 124 sailors from 22 countries of the world have converged in Bahrain to compete in this 10 day regatta, hosted by the Bahrain Maritime Sports Association.

The measurement process has started and each competitor will have their boat and sails checked to ensure that they are compliant with the class rules. The New Zealand team have been in Bahrain for a few days now, training and acclimatising and were pleased to be first in the queue for measurement! 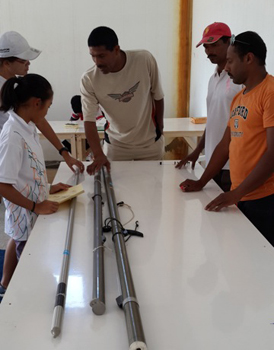 Measurement and registration continue tomorrow, with the practice race taking place on Sunday. Championship races start on Monday. Good luck to all our sailors at the Optimist Asian Championships 2014!