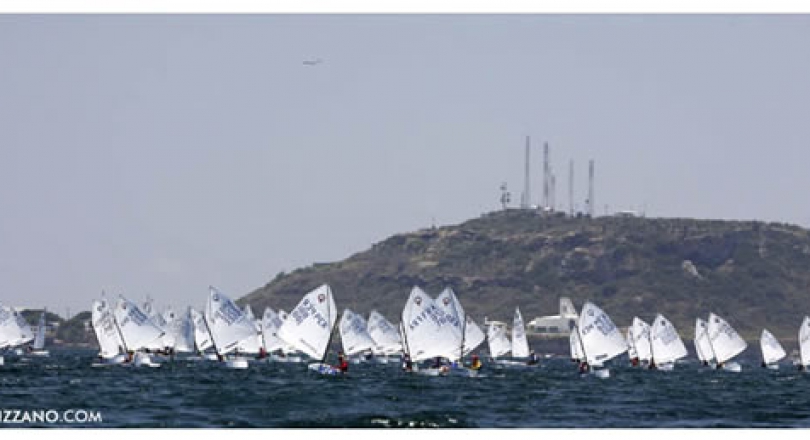 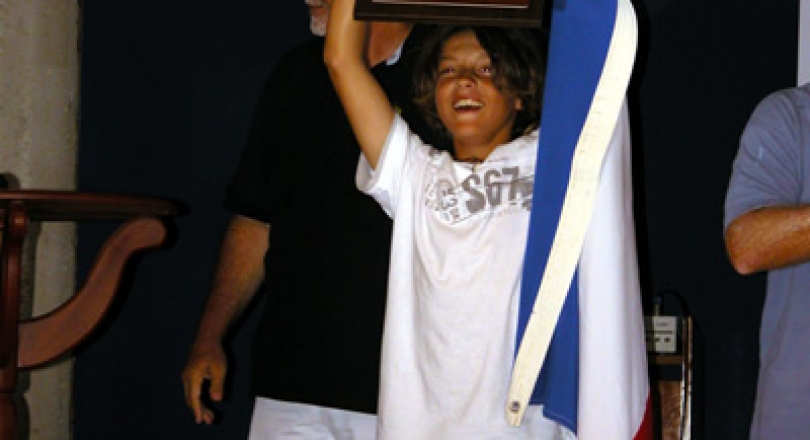 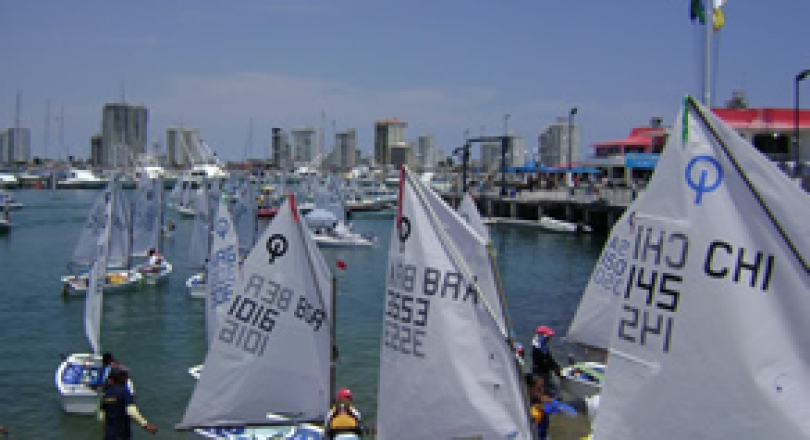 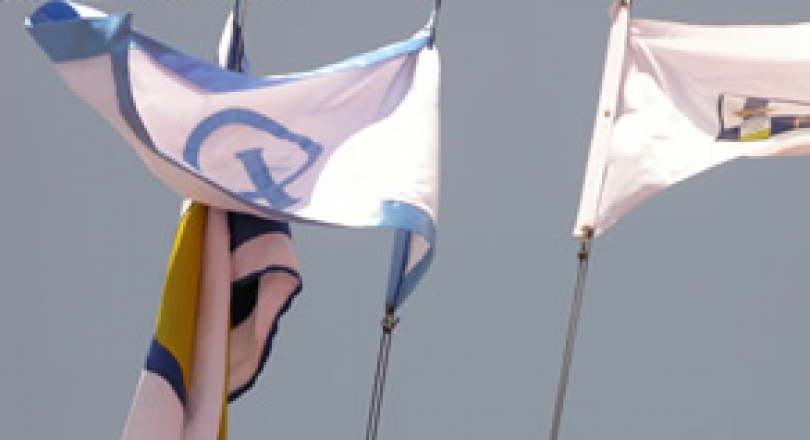 The South American Championships have just ended, the winner decided on the final race. Arthur Fortune, from Guadeloupe – France was the leader going into the last race but he had to return home earlier than expected due to a last-minute change in his flight schedule and was not able to sail race 12.

The IODA South American Championship is over!

The South American Championships have just ended, the winner decided on the final race. Arthur Fortune, from Guadeloupe – France was the leader going into the last race but he had to return home earlier than expected due to a last-minute change in his flight schedule and was not able to sail race 12.  With a lead of 5 points over Alonso Collantes in second place and only 6 points to be added to his score after excluding the DNC, this was going to be a thrilling finish. Alonso won the final race and finished the event tied in points with Arthur.

Alonso did remarkably well and sailed consistently throughout the event but by race 8 he had already used up both of his discards. The tie between Alonso and Arthur was finally broken by the number of first places, of which Arthur had three, to Alonso's two.  Arthur won the open event and Alonso was second overall and first in the closed event. 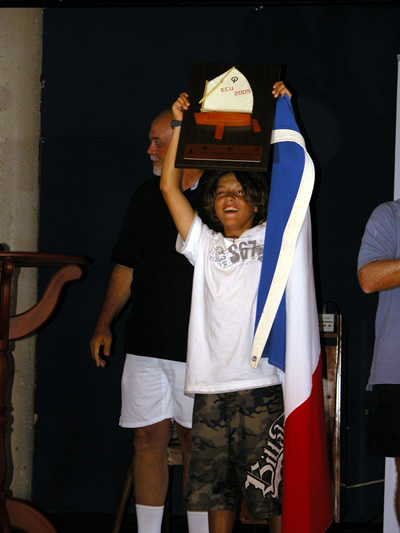 Further down the ranking, third overall and second South American was Mario Mazzaferro (winner of the open European 2008) from Brazil, who had been a fierce opponent to Alonso until the very last race. Third on the podium of the closed event was Ricardo Paranhos, also from Brazil.

Among the girls, Isabele Caldeira from Brazil led the fleet since the beginning of the championship, won race 11 and was 10th overall. Second was Andrea Ortiz from Mexico, and third Odile van Aanholt from Netherlands Antilles. 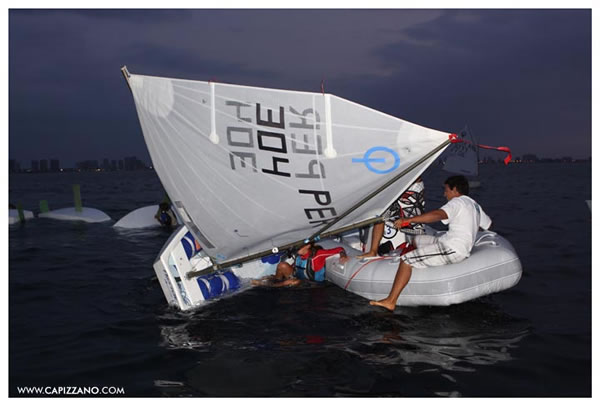 Perú are once again the South American Team Racing Champions!! 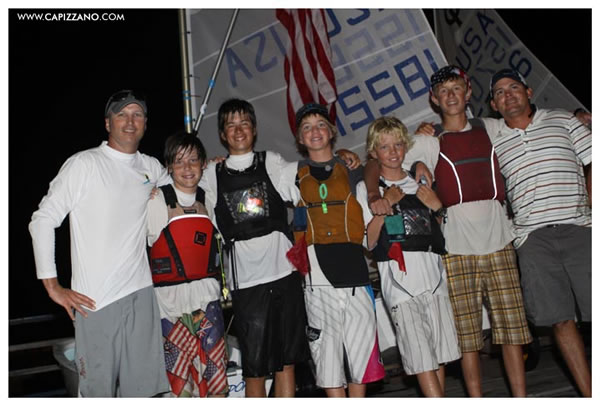 ...and USA is the newly crowned winner of the Nation's Cup!

Peru and Argentina had been among the favourites and their final battle was predictable. But close to the grand final, more than one must have thought that the battle would be between Perú... and Perú! Team PER1 arrived at the finals undefeated, leaving behind the teams from Venezuela and the first and second teams from Argentina. Team PER2, meanwhile, advanced in the grid defeating Brasil 1, Brasil 3 and Chile. But both teams were forced to face each other before the finals and PER2 found their first setback.

PER2 arrived at the semi finals having lost only one race and so did Argentina 1, who had lost against PER1! Argentina managed to defeat PER 2 and met once again with PER1, who had defeated them in Race 20. The first race of the sail off was an easy win for Peru, foretelling that only two races would be needed to secure the championship but Argentina took them by surprise and won the second race with 1, 2, 3 and 8. With only one race between them and the Gold PER found their strenght again and won the third race of the sail off easily with 1, 2, 3 and 5.

Meanwhile, in the Nations' Cup USA1 had almost no rivals. They won all the races before the final, including one against Bermuda, who were their opponents at the Sail off. The only race Bermuda had lost before the finals was against USA1, and once again they found themselves facing an unbeatable opponent. USA won the sail off easily with 1, 2, 3, 4 in the first race and 1, 2, 3, 8 in the second.

The lack of wind at midday forced the Race Committee to postpone the first race of the championship, which had been scheduled to start at 1200. Sailors had to remain on shore until 1235 when flag D was finally raised, allowing them to launch their boats. The two races of the day -three flights each- ran smoothly in a 5-6 knot wind.

Gabriel Eldstrot from BRA leads the scoreboard with a bullet and one second, while Andrea Ortiz from MEX, tenth overall, is first among the girls. But with 10 races still to be sailed, nothing is for sure! | Results |

The South Americans in Salinas, Ecuador are about to begin. The 191 sailors representing 18 nations from South and North America and the Caribbean, were officially welcomed at the Opening Ceremony on April 3. The majority of them have been training for two or more days now, enjoying an unusual 10-12 knot south westerly breeze.