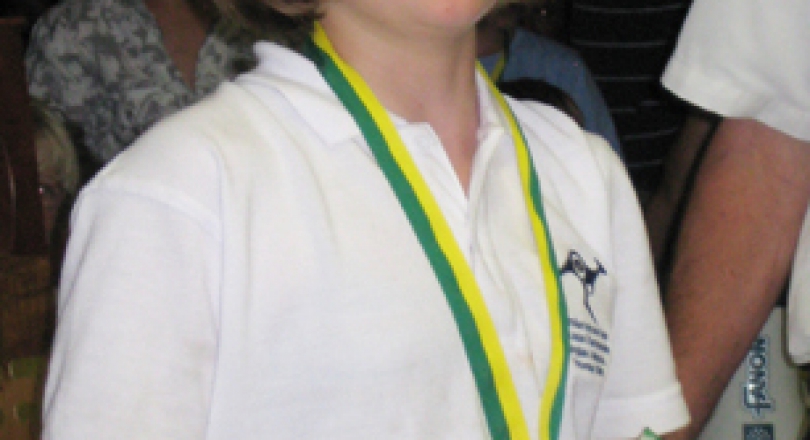 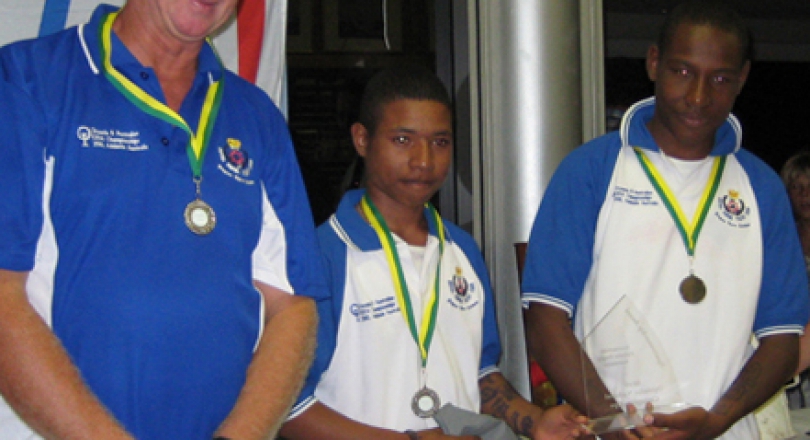 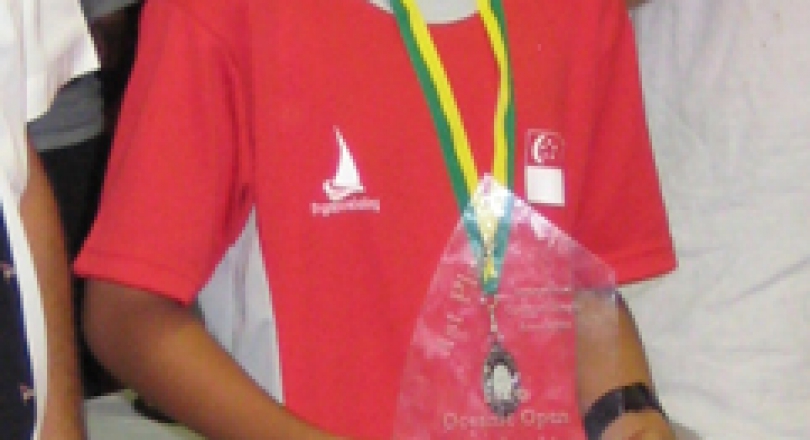 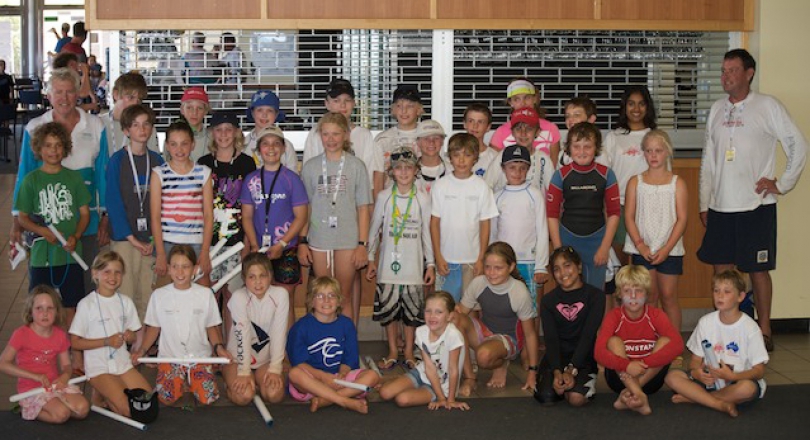 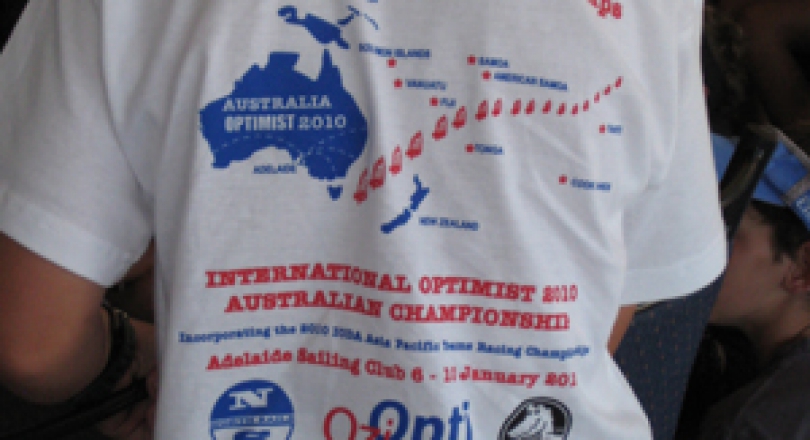 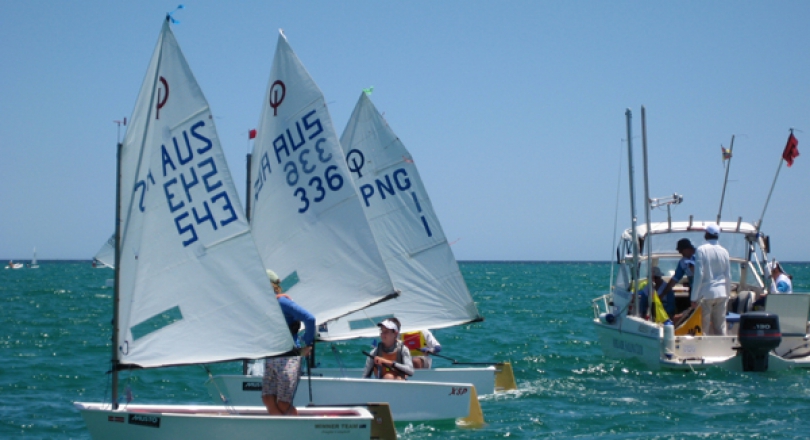 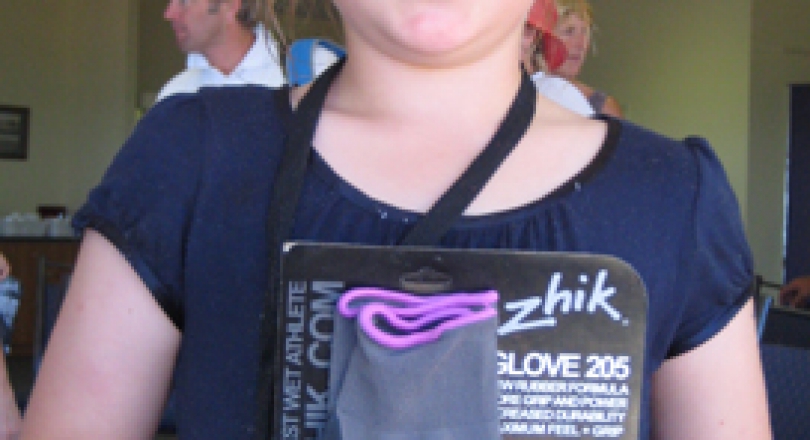 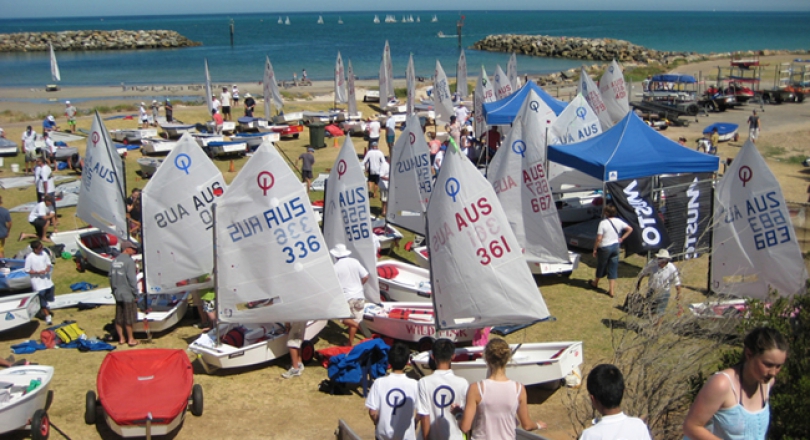 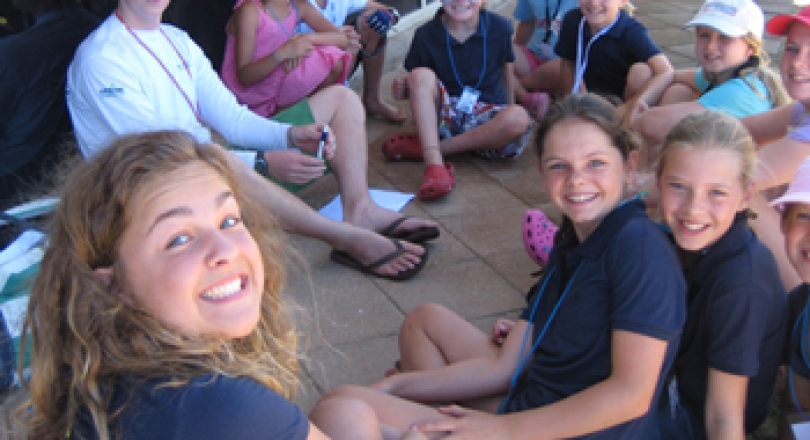 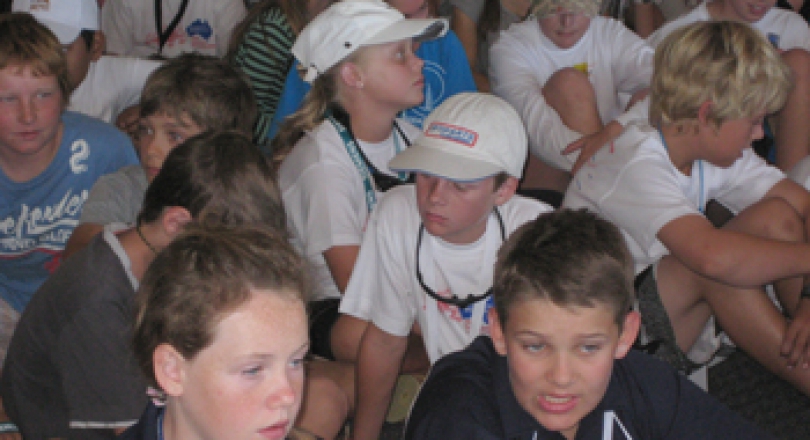 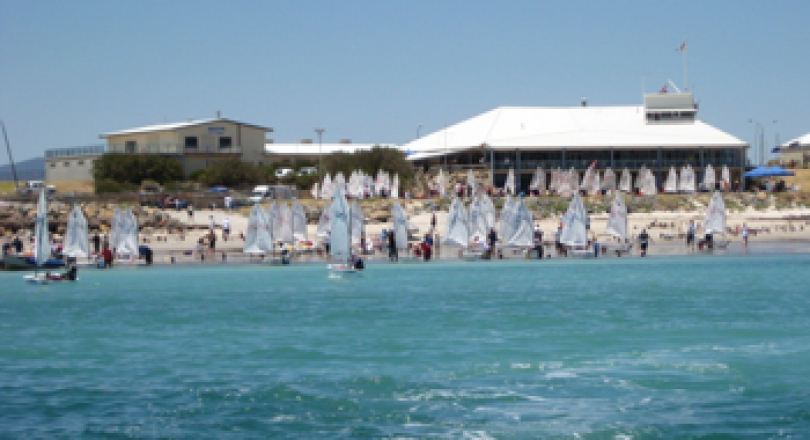 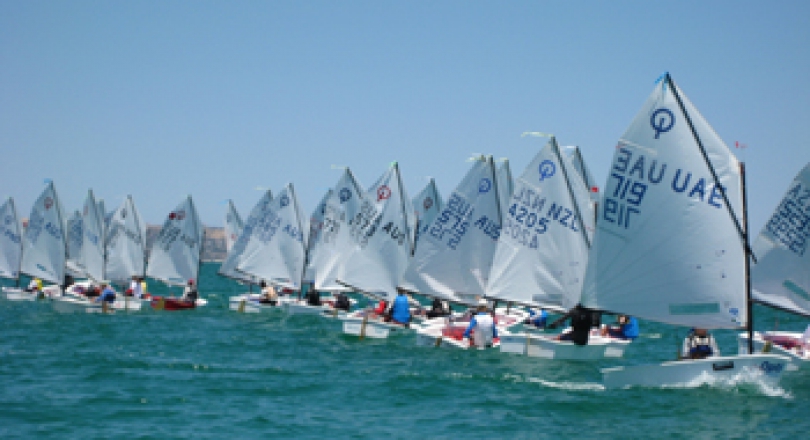 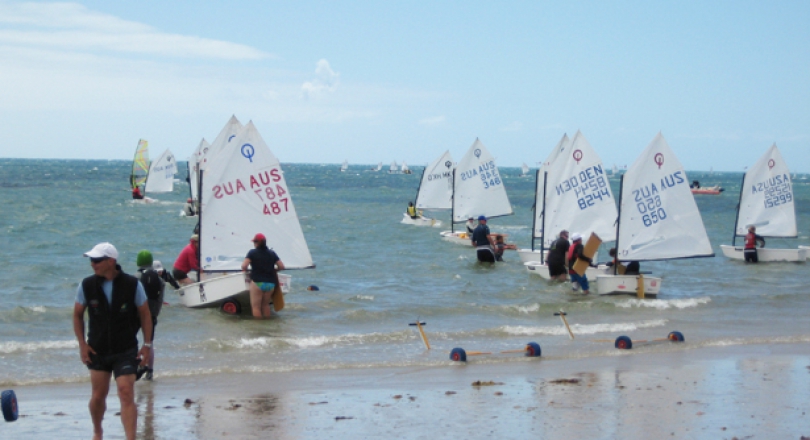 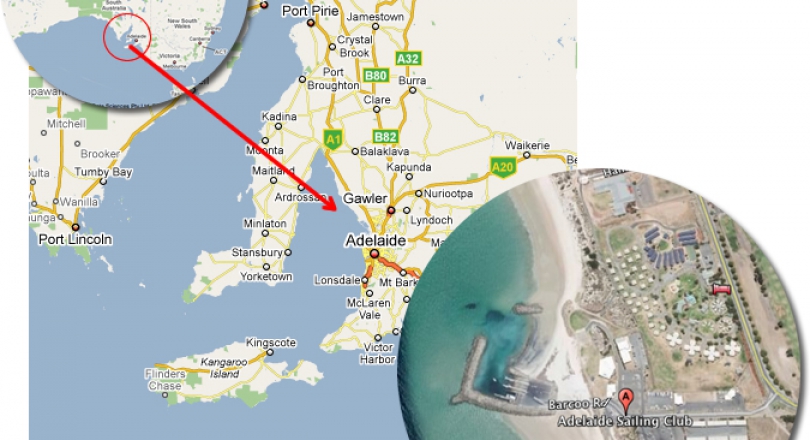 Prize Giving photos - the end of a great regatta

Prize Giving photos - the end of a great regatta

For more pictures of the event, especially the training at Brighton & Seacliff Yacht Club, click on the link below.

The competitors waited in vain for the sea breeze to develop today. The extreme temperatures of 42°C cancelled out the breeze and at 1.30pm the race committee announced that there would be no racing today and effectively brought the championship to a close.

Congratulations to everyone who participated in this event and a big thank you to Adelaide Sailing Club and all of the many volunteers who made this event possible. Tonight there is an awards dinner when the winners will receive their prizes and everyone will celebrate this great event.

Prizes will be awarded to every fleet including the Green Fleet who met yesterday for a de-brief and team photo. They, like the Championship fleet, have seen a domination by girls here which is always encouraging and demonstrates the equality within the fleet. 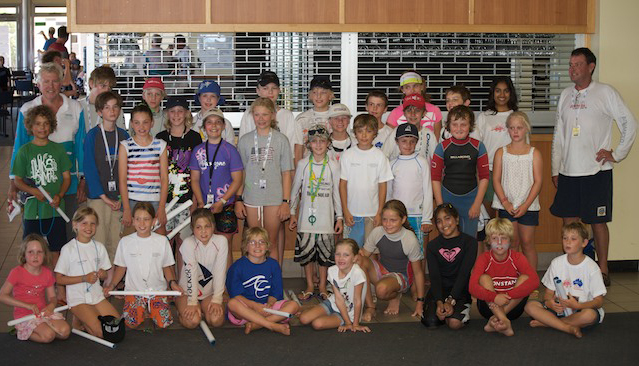 A report and pictures from the awards dinner will be published tomorrow.

As temperatures here in Adelaide look set to reach 39°C the race committee will have a difficult task to complete the scheduled 4 races today. This morning there was a 10 knot land breeze but as the temperature climbs this will compete with the sea breeze which may result in no wind at all, which is exactly what happened. 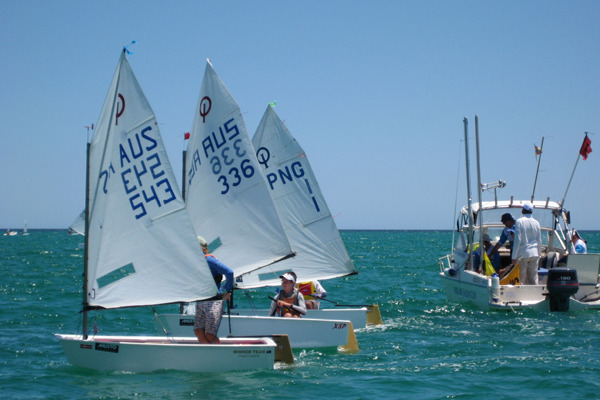 The boats launched for race 5 at 11am this morning in what was a very shifty breeze from the north east. Getting the fleet away was difficult as the shifting breeze at one point meant that the sailors could not lay the pin end mark on starboard tack. Eventually after several abandonments the fleet got away. For the sailors this was a particularly frustrating race as the wind flicked 180° more than once and beats became runs and vice versa. Luckily all divisions completed race 5 and then as the breeze died completely, the sailors retired to the clubhouse to wait for conditions to improve.

Finally, just after 5pm, the sailors were called out again for the sixth race of the championship. The breeze was still patchy but with 6 knots and building, the race officer was hopeful of getting in a race before the sea breeze died completely at the end of the day. The fleet started cleanly but the tide was pushing the sailors down the course so there were a few anxious moments when the first sailor rounded the windward mark just minutes before the time limit. The breeze had now strengthened to 9 knots and this final race of the day means that the first discard of the championship can now be applied.

The forecast tomorrow is for even higher temperatures so once again we may be sailing into the early evening when the sea breeze becomes more stable.

First thing this morning the sailors arrived at the club to a flat sea with little breeze. The race committee were optimistic of starting on time and preparations by both race committee and sailors were rewarded as the breeze began to fill in from the south west.

Although it was the intention of the race committee to run four races today, they were only able to run three.

After a total of four races, Jillian Lee from Singapore, who has sailed remarkably consistently so far, has a 7 point lead from Drew Gallagher USA, in second place. The Oceanian sailors are lead by Lachlan Gilmour and Jack Felsenthal, both from Australia, in fifth and sixth place, tied on 26 points.

The Adelaide Sailing Club here in West Beach, South Australia are playing host to the IODA Oceanian Championship and the AIODA Australian Nationals. Today has seen perfect conditions for the racing with a gentle 10 knot sea breeze and the course immediately infront of the clubhouse, perfect for the many spectators.

This event has attracted sailors from 11 countries and 4 continents and is the largest Oceanian Championship for many years. This morning the measurer, with his team of volunteers, succeeded in completing measurement ready for the briefing from the race committee prior to the practice race. Malcolm Hughes, the PRO and Mike Badenoch, the club Commodore, welcomed the sailors to Adelaide and explained the format for the next five days of racing.

After the practice race, the Championship fleet, split into 4 divisions to begin the first race of the championship.

The sea breeze held steady from the south west for the first race of the championship with white and blue divisions in the first start and green and yellow in the second. Nia Jerwood, 11 years old from Western Australia, won the first start ahead of Jia Min Audrey Lim of Singapore. Singapore dominated the second start, taking the first three places.

Racing starts again tomorrow at 11am with 4 races scheduled. Adelaide is forecast to suffer a heat wave over the next few days, with temperatures expected to reach into the 40's. This could compromise the strength of the sea breeze so everyone here is hoping that the exceptional conditions of today continue despite the extreme heat.

Sailors arriving early for the IODA Oceanian Championship took to the water today in a building sea breeze which reached 25 knots. Eighty-four sailors from over eight countries joined in the first day of the Ozi Opti coaching clinic which runs from the 2-5 January and many will also participate in the Gulf of St Vincent Classic Regatta, all generously hosted by the Brighton and Seacliff Yacht Club. This provides an excellent warm up for the 2010 IODA Oceania and AIODA Australian Championships which begin 6 January a little further north at Adelaide Sailing Club. 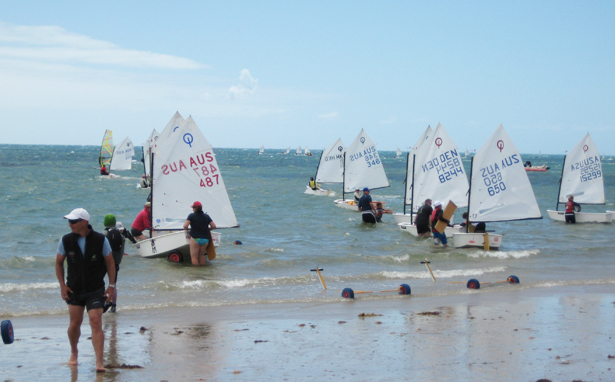 Sailors throughout Australia and Oceania have travelled, many with their families, to support this event. They have been joined by sailors from Europe, Asia and the Americas to compete in probably the biggest international optimist championship ever hosted in Australia

We are glad to inform our members that the Notice of Race for next IODA Oceania Championship i snow online at:

This edition of the continental championship, usually held every other year, will be hosted by Adelaide Sailing Club and is organised in accord to the conditions of the IODA and the Australian IODA.

The races will take place in the waters of Holdfast Bay in the Gulf of St Vincent. Sailing conditions are said to be excellent, with temperatures varying from 17 to 30 C during the day and winds in the range of 12 knots. This, together with the superb facilities of the venue, should make this event a huge success. 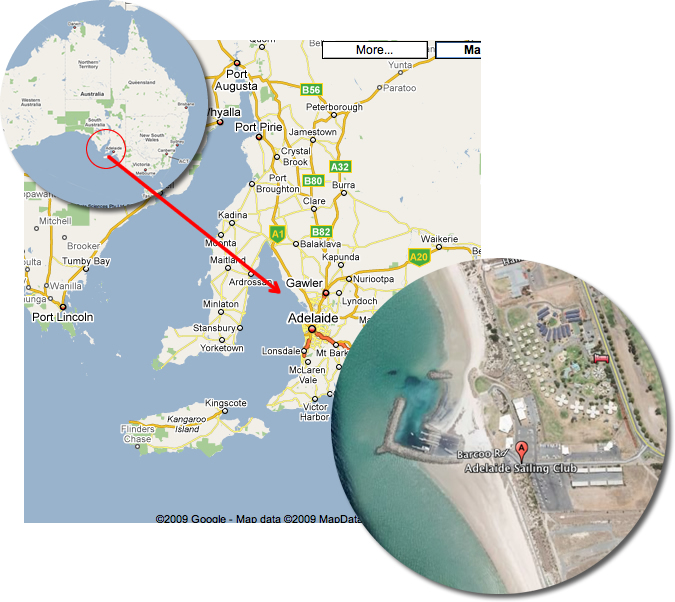