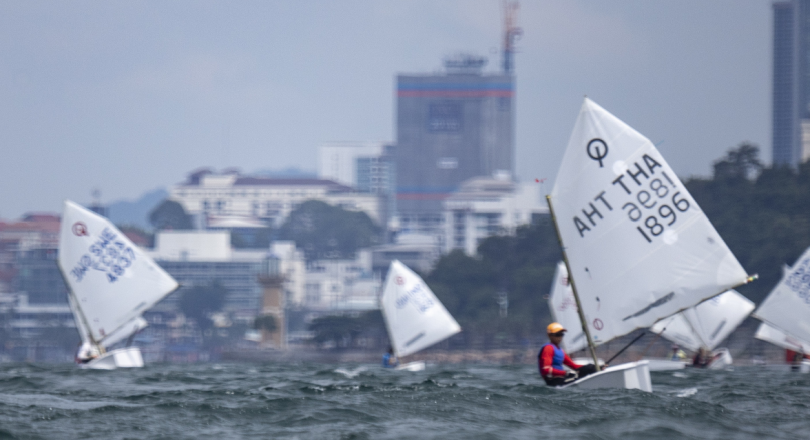 2021 Asians & Oceanians Off to Good Start

Thailand, Turkey and the USA Stake Claims on Top Spots

Sailors from Thailand, Turkey and the USA have made their intentions clear on the first day of racing at the 2021 Optimist Asian & Oceanian Championship. They intend to sail away with trophies at the end of the week of racing at the Royal Varuna Yacht Club in Pattaya, Thailand. But their competitors aren’t going to let them do so without a challenge.

After just two races, Turkey and Thailand appeared to hold seven of the top ten positions. Turkey’s Gorkem Arda Kocak was in first, Thailand’s Weka Bhanubandh in second tied with Turkey’s Medina Havva Tatlican. The third race however saw the leaderboard reshuffled. The USA finished well enough to take three of the top ten spots and Japan the tenth spot based on prelimary results. Host country sailor Weka ended the day on top, six points ahead of American Wylder Smith.

The first race was held in steady wind, a relief for race officials and sailors after very shifty winds over the weekend. Turkey’s Medine proved she has the skills to be a front runner in the regatta, holding onto the lead throughout most of the first race, only to be passed on the final leg by Sweden’s Levi Bernhardtz and Thailand’s Thanapat Siricharoen who had been battling for position with each other throughout the race. Turkey’s Ege Ayyildizbayraktar took fourth and Weka fifth.

In the second race, white caps wer spotted on the course and the wind was 12-13 knots with a clear favoring on the right where there was more pressure and a lighter current. Medine found herself first around the first mark again, but closely followed by Weka and Singapore’s Nicole Lim. By the second mark, it was Turkey’s Gorkem Arda Kocak and Thailand’s Chanatip Tongglum jostling for first place. Gusty conditions added an extra challenge but both held their lead going into the last 100 meters of the race, preliminary results showing Gorkem pulling ahead just at the finish, followed by Chanatip and Weka, with American Wylder Smith slipping in just ahead of Medine.

The last race of the day was postponed twice as a storm front moved in creating shifty wind conditions but by the time of a third start, the wind was steady again. The most dramatic race of the day saw the top ten around the marks changing position regularly. As commentator Alex Frefel, an RVYC member who narrates the event’s Live Facebook Feed, said “It was anyone’s game.”

Several of the finishes were nail-biting, but preliminary results show Singapore’s Ethan Chia managed to pull well ahead of the top ten to finish first, the USA’s Keith Grupenhoff second, Sweden’s Malcolm Dahlberg third. Three other Americans (Finnegan Grainger in 5th, Ewan Dossin in 7th, and Harrison Szot in tenth), two Thais (Kan Kachacheun in 6th, Weka Bhaubandh in 8th) - and a Turkish sailor (Ege Erdemil in 9th) rounded out the top ten of the last race of the day.

Another seven races will hopefully be sailed this week so the leaderboard is likely to undergo some big changes, as sailors are permitted to drop their worst result after five races have been sailed. Among the fleet are 64 youth sailors from eight countries, all eager to prove themselves in warm Thai waters.

For more information, visit the Event Microsite found here or download the APP from Apple Store or Google Play.