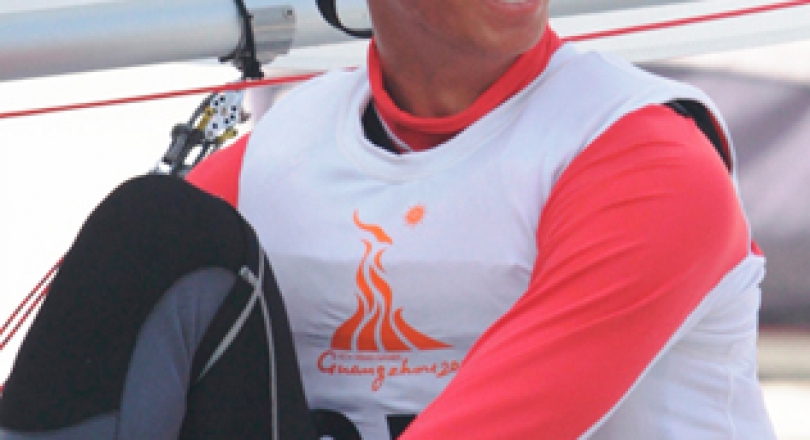 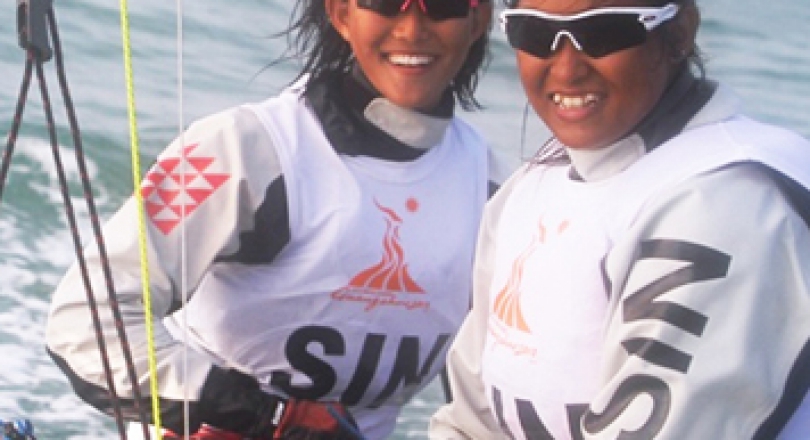 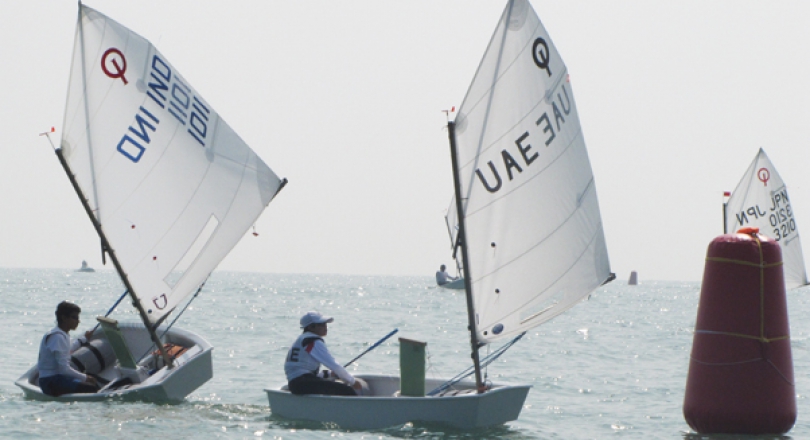 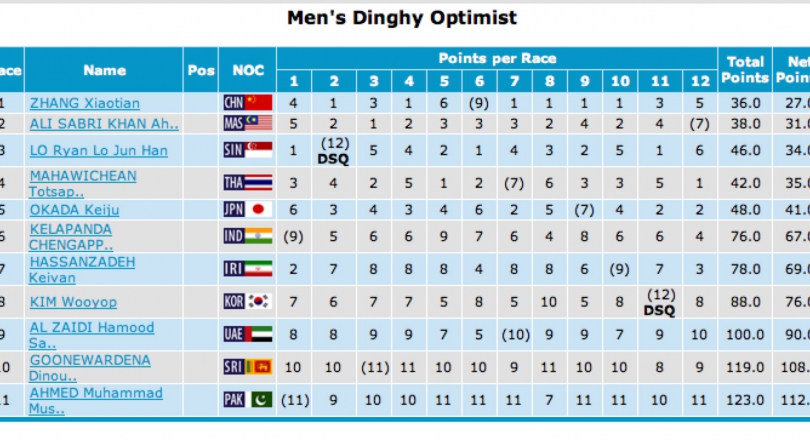 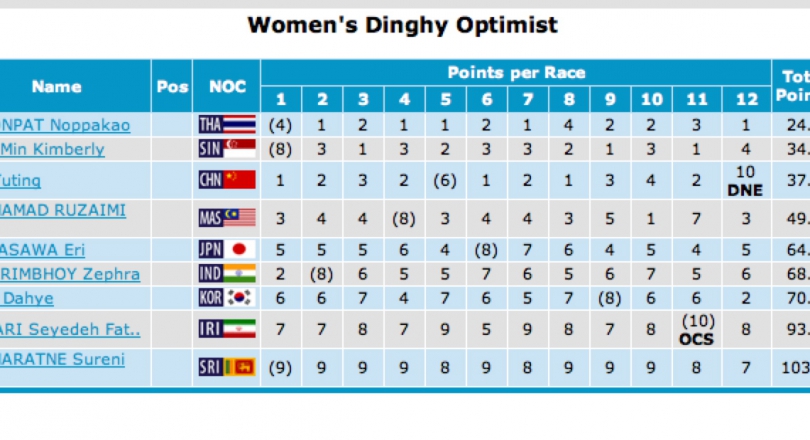 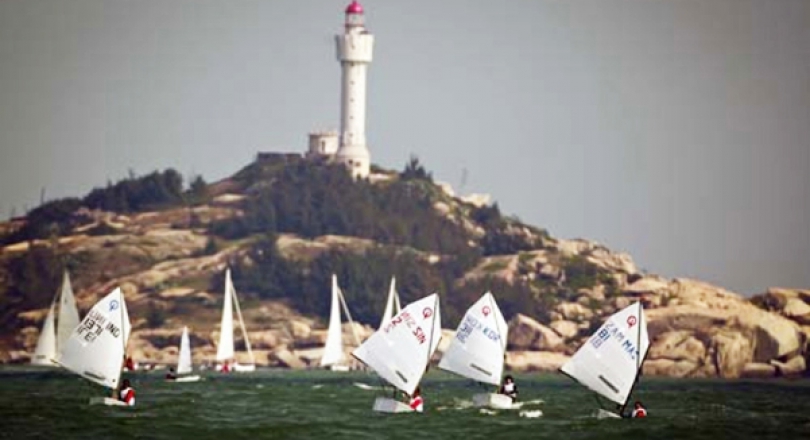 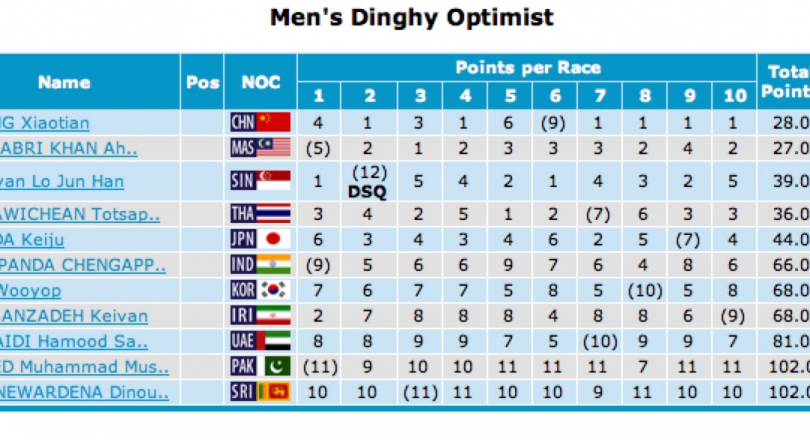 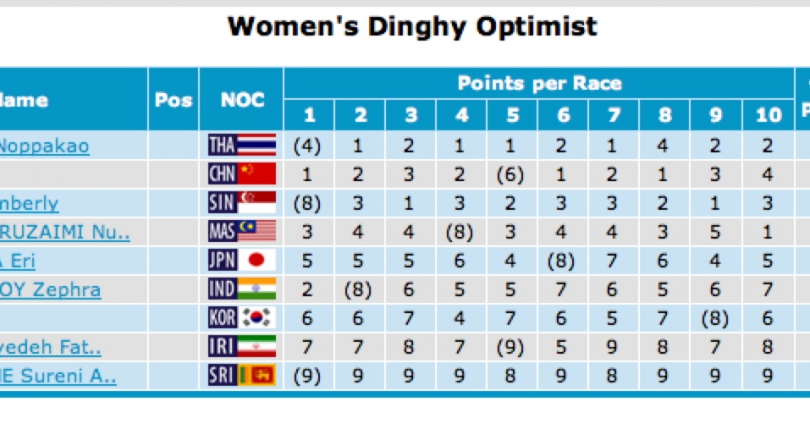 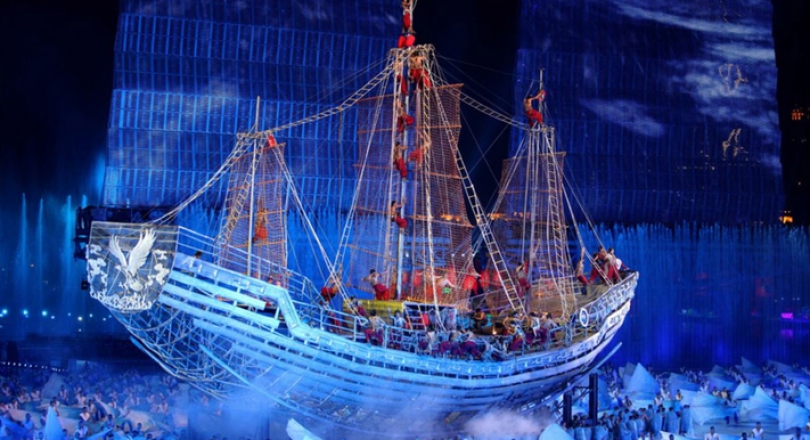 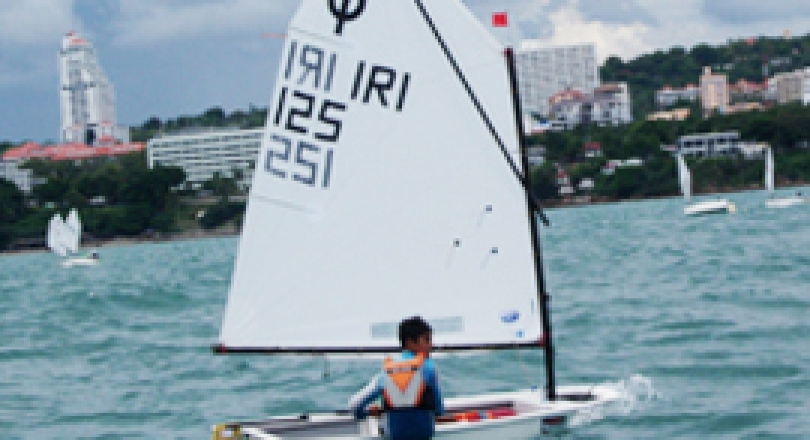 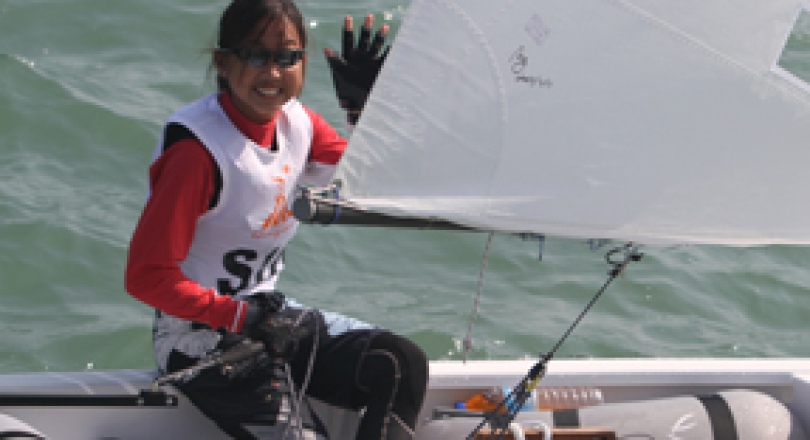 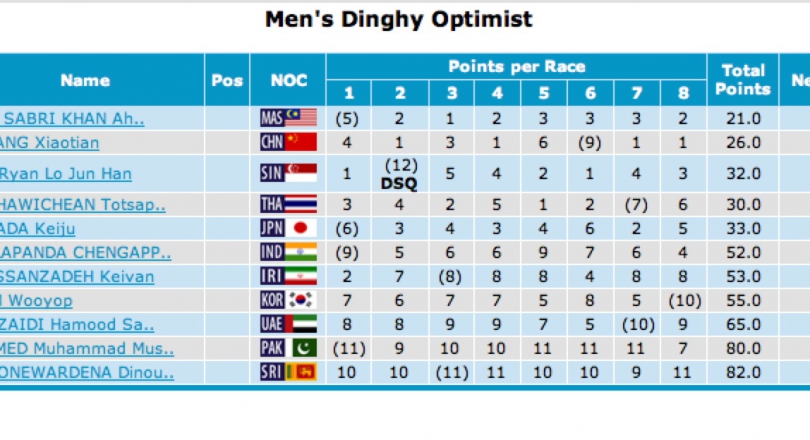 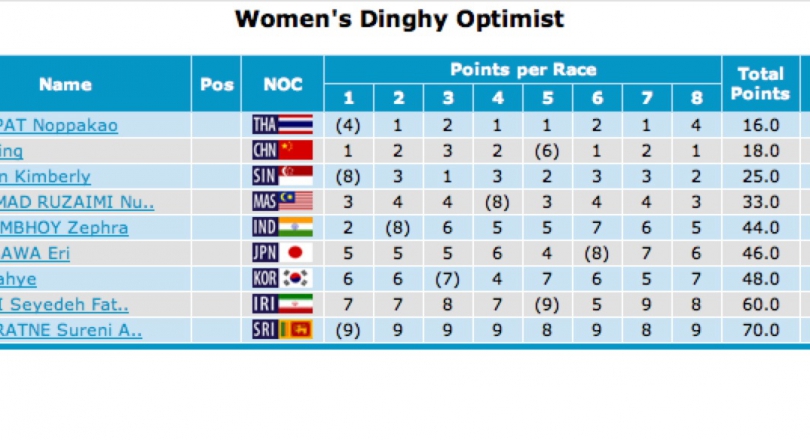 The importance of the Optimist in Asian sailing has been demonstrated once again by the sailing results from the Asian Games. Six of the seven winning dinghy skippers were former Optimist internationals, five of them having participated in Optimist Worlds. Their ages range from Damrongsak Vongtim (THA), 15th in the Optimist Worlds of 1984, to Rachel Lee Qing (SIN) who took girls bronze just three years ago.

Congratulations to them all.

The final 2 races for both fleets, were completed today in another light and shifty day. 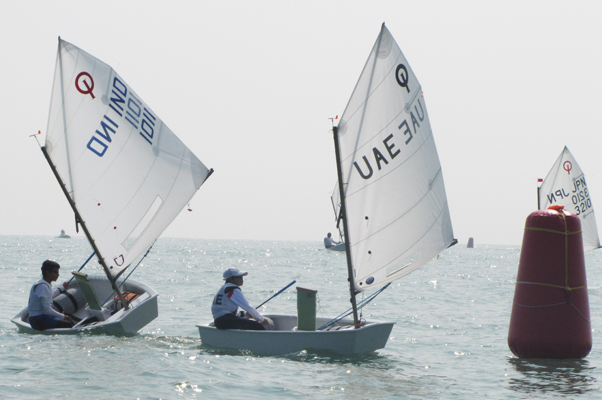 In the girls fleet, Noppakao Poonpat (Thailand) extended her lead to take the gold medal ahead of Kimberly Lim (Singapore) who sailed well enough today to move up to silver, with Yuting Lu (China) in bronze. Noppakao sailed a remarkably consistent regatta with her worst result a 4th place.

There were no changes in the places today in the boys fleet with Xiaotian Zhang (China) taking gold, Armad Ali Sabri Khan (Malaysia) in silver and Ryan Lo (Singapore) in bronze.

It was a highly competitive contest here in Guangzhou and many of these sailors will compete again at the Optimist Worlds in Langkawi, Malaysia, at the end of December. China did not participate at the IODA Asian Championships this year but Kimberly Lim was the overall winner, chased closely by several sailors including Nappakao. It will be an interesting battle at the Worlds.

The wind was very light and shifty in Guangzhou today making it challenging for the sailors and frustrating for the race committee. Two races had been scheduled for all fleets but only the Optimists and Lasers managed to complete races 9 and 10. For many this will mean that racing will continue on the reserve day to complete the event schedule of 12 races.

It has been very difficult to obtain information about these games and I must thank the Singapore Sailing Federation who are doing a fantastic job on both their website, Facebook and Twitter. 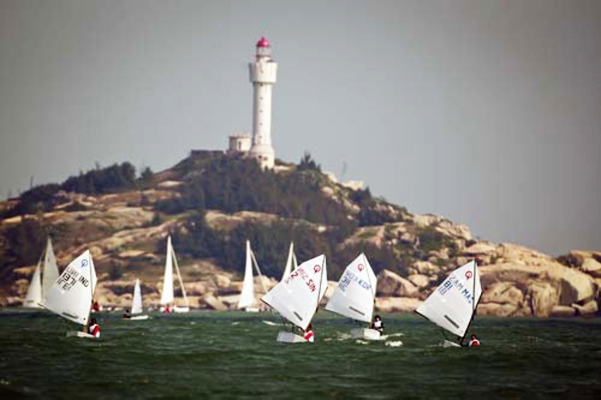 The picture above was taken by Mr John Heng and shows the optimists racing in Shanwei Bay, Guangzhou.

In the girls fleet, Noppakao Poonpat (Thailand) had a very consistent day keeping her nearest rival behind her in both races and as a result has pulled three points clear of Yuting Lu (China) with Kimberly Lim (Singapore) in third. In the boys fleet, Xiaotian Zhang (China), has won six of the ten races so far and leads Armad Ali Sabri Khan (Malaysia) currently in second place, with Ryan Lo (Singapore) in third.

There have now been 4 days of racing at the Asian Games in Guangzhou, China, with 8 races completed for both boys and girls in the optimist class. Tomorrow is a well earned lay day.

The 16th Asian Games in Guangzhou, China, opened in dramatic style with a ceremony which drew on Guangzhou’s rich maritime history, held in a purpose built arena, located on a small island on the Pearl River. Sailing is one of the 42 sports in this multi-sport event, held every four years in Asia, allowing athletes from all over the Asian continent to compete. 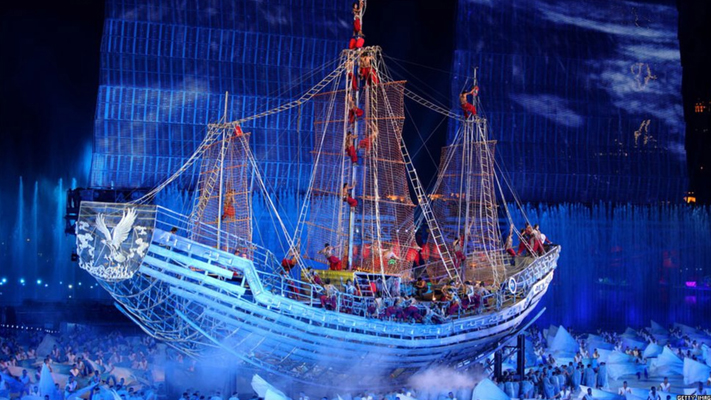 Optimist girl and boy are two of the 14 sailing classes and participation in these two fleets, along with the Laser Radial, is the highest amongst the sailing class entries with 12 nations participating.

The Optimist fleet has entries from China, Malaysia, Thailand, Japan, Singapore, Iran, India, Korea, United Arab Emirates, Pakistan and Sri Lanka. The entry from Iran in both boys and girls fleets is particularly encouraging as it was only as recently as 2009 when they participated at their first IODA Continental Championship and already this year they have had sailors finishing races in the top 20 in what was a very strong fleet at the IODA Asian Championships in Pattaya, Thailand. Sri Lanka are another country represented in Guangzhou whose fledgling fleet benefitted from an IODA 6 for 5 grant for boats and sails and more recently an IODA regatta grant to Pattaya.

After 6 races there is one discard and the top two boy sailors are now separated by just one point. Armad Ali Sabri Khan (Malaysia), has only one result outside the top three and Xiaotian Zhang (China), has won four of the eight races so far. In the girls fleet, Noppakao Poonpat (Thailand), is tied with Yuting Lu (China) for first place. They have pulled 5 points clear of Kimberly Lim (Singapore) in third. These results are provisional as there are still some protests pending but the next two days of racing will be particularly close, with the sailors at the top of the fleet sailing so consistently.

The conditions in Guangzhou have been perfect ­ there is a little current, the wind has varied from 10 to 20 knots and it has been warm and sunny. Racing continues again on Friday with just 4 more races needed to complete the scheduled 12.