Last Day of the 44th Brazil Championship and Final Results

A new Optimist Brazilian Champion will be crowned in half an hour here in Florianópolis, Santa Catarina. No doubt Tiago Monteiro, from the state of Pernambuco, has been determined to win since last year when he finished second and was awarded the trophy of Vice-Champion. After a first "not-so-good" day of races at the very beginning of the event, at which point he finished 11th and 3rd and was ranked 13th, Tiego hasn’t stopped climbing up positions in the ranking. Yesterday he had already arrived at the top, with a 2 point lead over Gabriel Kern, who had been leading since the beginning. Today’s races only confirmed Tiego's first position: a 2nd, a 5th and an 11th widened the gap, leaving 12 points between Tiago and Gabriel, who in turn finished 16 points ahead of Giovanne Pistorello, who was third overall. 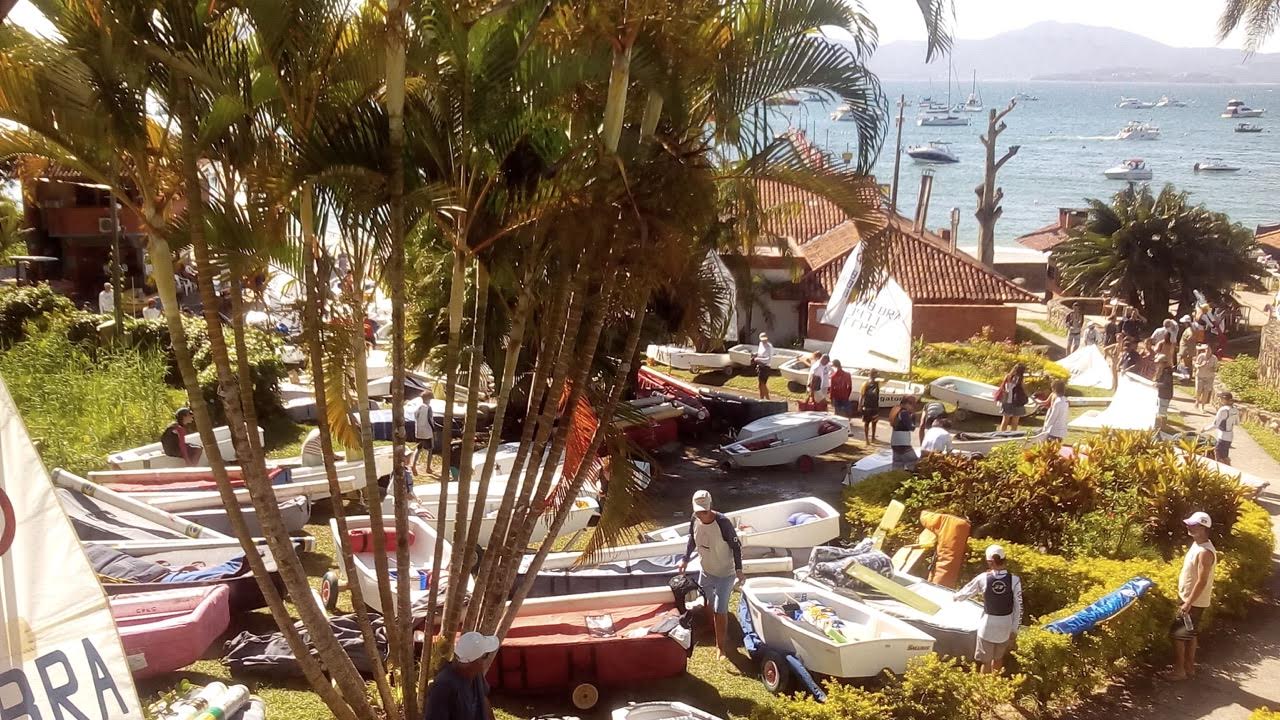 With 133 competitors divided into two fleets, the championship was comprised of a qualifying and a final series, following the IODA standard programme. The qualifying series took place on the first three days, after which a team race event was sailed, followed by a spare day on Friday 15th. With 6 races scheduled, the finals started yesterday, but the sailing conditions did not help and only one race was sailed. Today, on the contrary, the day was a perfect Florianopolis day: the start of the first race saw a breeze of 8 knots while the last sailors to cross the finish line of the third and final race had to hike on 12 knots of wind.

The team racing event, organised with the same format as the one used on Continental Championships, was held on Thursday and gathered 16 teams from 6 states (Rio de Janeiro, Pernambuco, Santa Catarina, Bahia, Sao Paulo, Rio Grande do Sul). Pernambuco and Rio Grande do Sul demonstrated a consistent performance consistent from the beginning, each defeating their opponents until they reached the finals.   At the last stage all three races had to be sailed before Rio Grande do Sul could celebrate victory.

All in all, it was a successful top- level event of which the "Iate Clube de Santa Catarina - Veleiros da Ilha" can be proud.

Report from Florianopolis for January 13 - Perfect day of racing!

There is no other way to describe the last day of the qualification series in the Brazilian National Championship being held in Jurere, Florianopolis, hosted by the Iate Clube de Santa Catarina. Sun and 8 to 12 knots of wind marked the end of the series that selected the 67 sailors that can still fight (theoretically) for the most longed for title at national level. 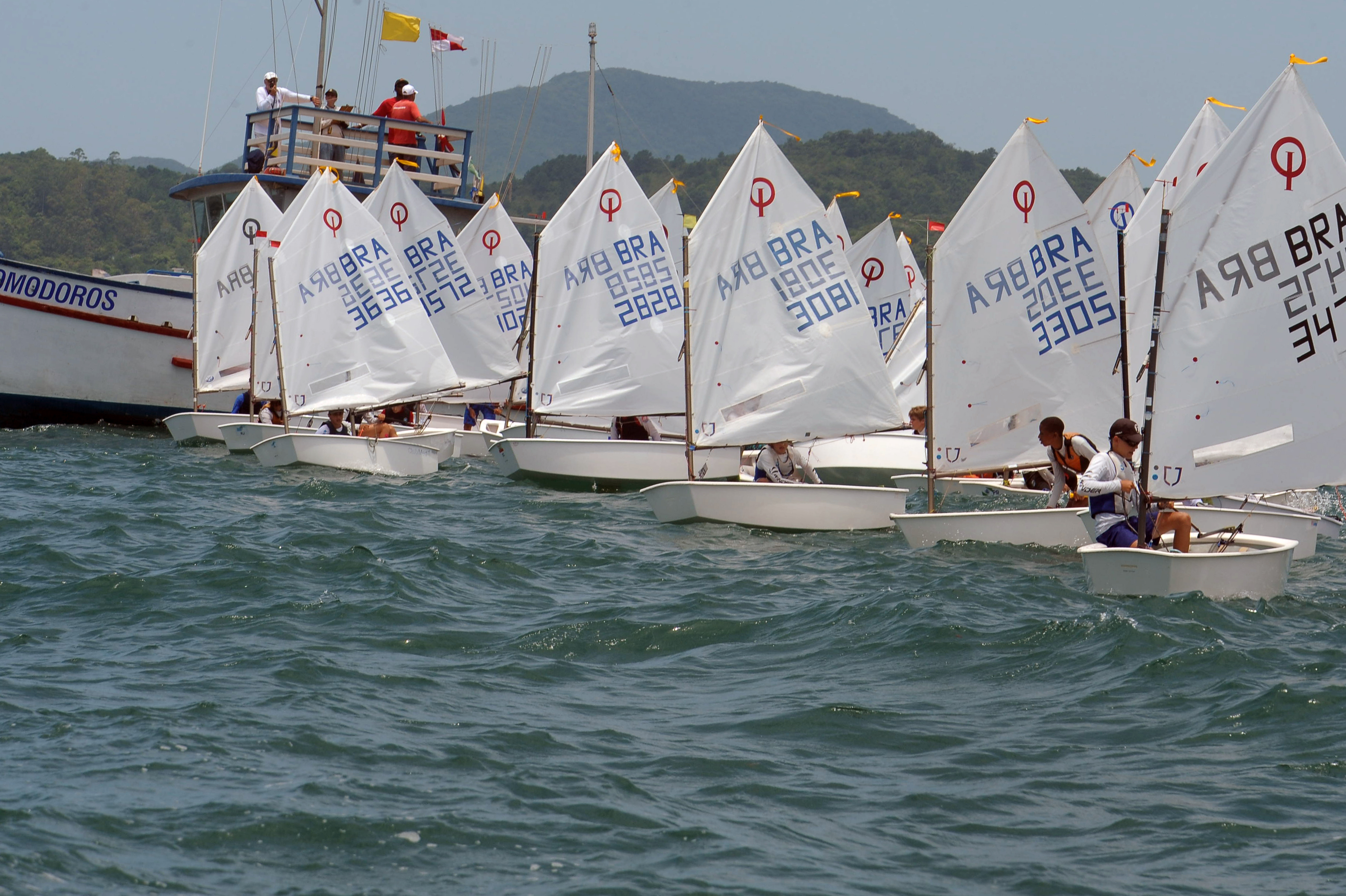 Gabriel Kern, from the Clube dos Jangadeiros, had another good day of races and, even with a UFD, finished the qualification series with a 15 point lead over Tiago Monteiro, from Pernambuco, who was second last year and is second overall today. Lucas Stolf from Veleiros do Sul climbed up in the ranking and is now third overall.

The first ten places in the ranking are as follows

The team racing is organised for a maximum of 16 teams from different states, and each state is allowed a maximum of three. The seeding of the teams is based on the results of the individual races up to race 6. Based on this, the selected teams are:

3 from Rio Grande do Sul

No wind at 830 in the morning today but we hope to have enough as the day goes by!!

Provisional results from Day 3 can be found here

A difficult day marked the beginning of the Brazilian National Championship in Florianópolis, Santa Catarina. Clouds and rain in the morning led to nearly no wind towards midday, forcing the RC to postpone with the display of Delta Flag. A general recall added 10 more minutes to the delay. Finally the yellow fleet started its  first race nearly two hours later than scheduled. The promising 8 knots blowing at the beginning of race 1 dropped down to 7 for the start of the second race and continued to decrease in strength, which meant the day finished with only two sailed races.

With a bullet and a fourth finishing position, the leader of the ranking is Gabriel Kern, from the Clube dos Jangadeiros in the South of Brasil. Four points behind is Roberto Cardoso from Pernambuco and third overall (tied in points with Roberto) sits Leonardo Crespo from the Olympic host city Rio de Janeiro. Among the girls Luiza Moré in 8th overall has a big lead over the next female sailor Marina da Fonte from Pernambuco, who is 17th.

A couple of protests had the International Jury work till quite late but the applied penalties did not have a significant impact in the ranking.

This is only the beginning and anything can happen!! 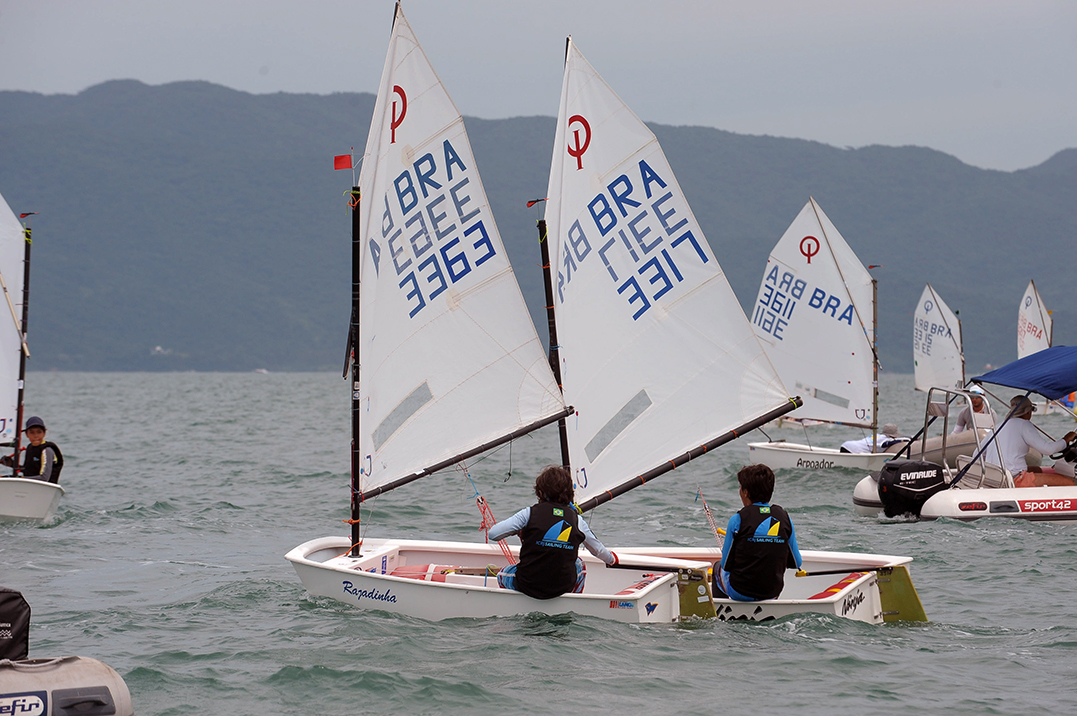 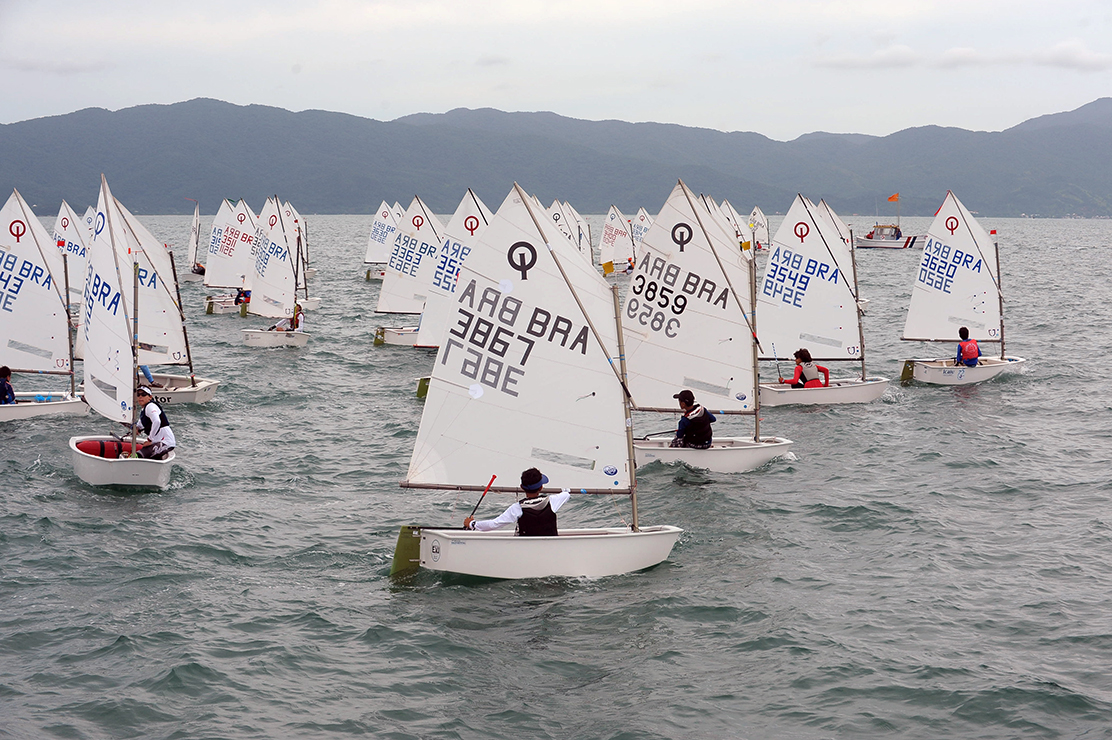 Delegations from all the corners of the country have been arriving in Santa Catarina since last week, to get used to the sailing conditions and test their skills against their opponents.

The wind had been blowing steadily from the North during the training days but it dropped to 2 knots in the morning of the first day of races (when does it not? :) so yesterday the youngest members of the Optimist family had to wait for nearly 90 minutes before they were allowed to launch. The Race Committee had a tough day on the water but managed to complete the 2 scheduled races in the programme.

Today it was an easier day, with a steady breeze of 7 - 10 knots from the North East that allowed for the completion of two more races in excellent sailing conditions.

The three first places in the ranking have remained unchanged since yesterday but the gap between the leader Vinicius Koeche and his followers has widened, adding up to 11 points.

Among the activities included in the 10 day programme of the Championship it is worth mentioning the “Conhecendo Novas Velas” project (“Getting to know new sails”) which was first organised last year in Rio de Janeiro and includes a chance for the competitors to meet the best Brazilian sailors that represent the country in World, Olympic and other top level international events.

The Beginners Cup draws to an end tomorrow and its prize giving marks the beginning of the official National Championship which, in turn, will determine the 15 sailors representing the country in the next South American Championship in Ecuador.

Today's results can be found here