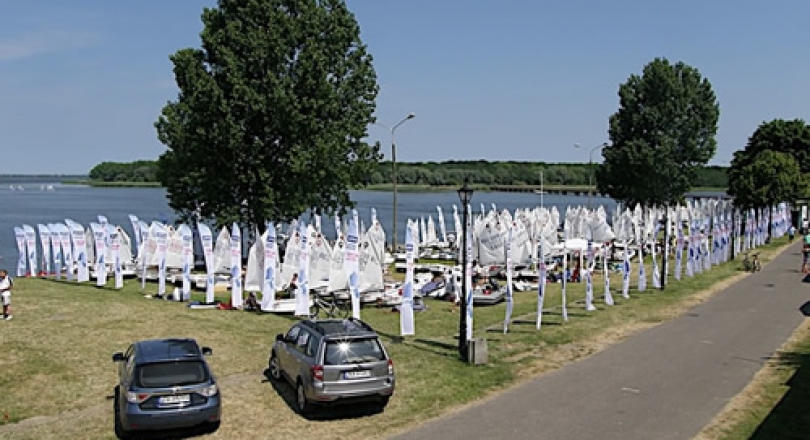 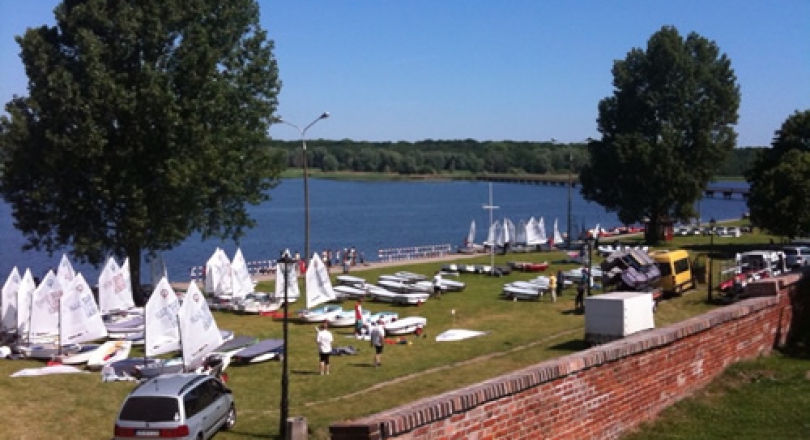 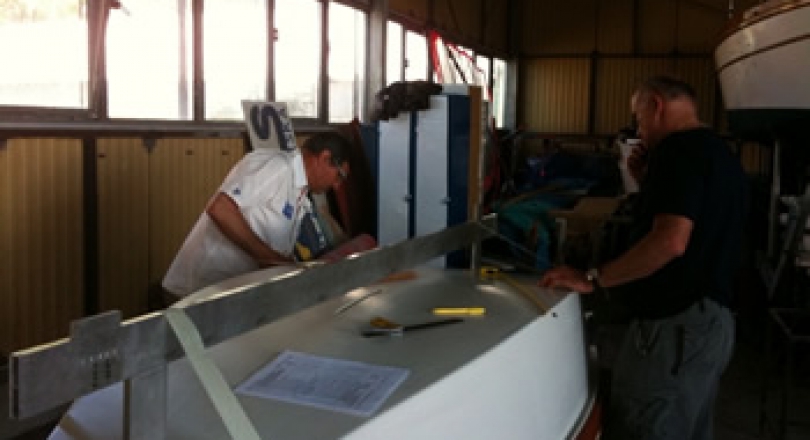 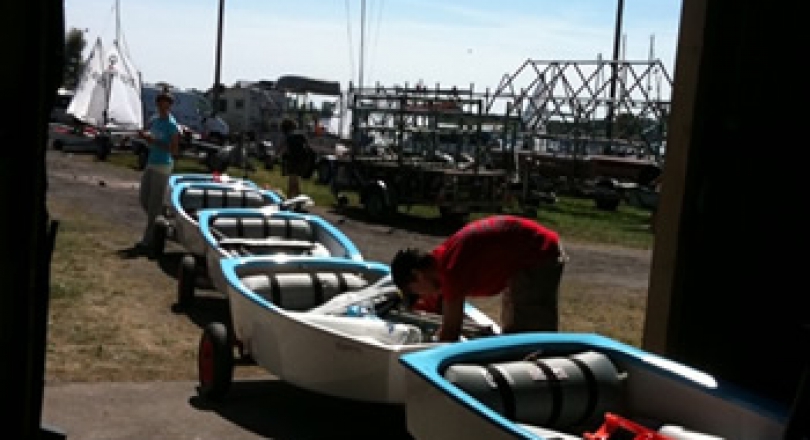 This evening there were celebrations for the prize winners, congratulations and thank yous to the organisers and the many volunteers and emotional farewells amongst the sailors as they said goodbye to new friends.

The lack of wind may have reduced the number of races but it had not dampened the enthusiasm of the sailors as they gathered before the stage here in Kamien-Pomorski. At the Europeans the girls and boys sail in seperate fleets so there are two European Champions and we congratulate them both.

This has been an excellent championship for Greece and they will lead the qualifiers through to the IODA European Team Racing Championship on Ledro Lake 24th August. The first 16 teams from this championship have qualified to attend and if the standard is as high as last year it will be an exciting championship. There will be live event tracking in Ledro of all races and so if you are not amongst the lucky ones to qualify, you can watch from your pc at home. Chris Atkins, Chief Umpire, will be giving his usual tactic coaching sessions which contribute towards making this a wonderful learning experience. The 16 teams that have qualified will be announced on Monday.

The European Championship is over. Unfortunately the wind didn't help much on the last couple of days and sailors and organisers had to be content with the results of the seven races completed over the first four days. What is important to highlight is that these seven races were sailed in varied conditions, with winds ranging from 4 to 20 knots.

Information about the closing ceremony and a general report about the event will follow shortly.

Flat waters in Kamien Pomorski today. Races had to be postponed and, although the weather forecast is not particularly encouraging we do hope that the Race Committee can start at least two races tomorrow. So far only seven of the twelve scheduled races have been completed.

Tricky wind conditions made it a difficult day for racing, not only for the sailors but also for the Race Committee. Races started in the afternoon in 12 knots of wind which gradually dropped to 3-4 knots, forcing the committee to send the fleets back to shore after completion of only two of the three races scheduled for the day.

Due at least in part to the diffgicult conditions, places keep changing in the top ten of both the boy and girl rankings. Francisca Russo had another bullet today in the first race but didn't find her way in the second, in which she finished in 37th place. However, she is still the leader of the fleet, with a 21 point gap separating her from Evangelia Drougka from Greece, in second place. Evangelia sailed to her best today, finishing 4th and 1st in the first and second races respectively, as did Paula Barcelo from Spain.

Konstantinos Oikonomidis proved very skillful in reading the wind in today's conditions as he finished first in both races. Meanwhile another Greek sailor, Grigorios Mazarakis, has climbed in the ranking and is now second after finishing 7th and 3rd. Lorant Pech remains comfortable in third place, 9 points ahead of Bora Orcav from Turkey, currently 4th.

Launching in 20 knots of wind

The weather system predicted yesterday, brought 20 knots of wind, much to the enjoyment of sailors and race officers, who after completion of three more races can be more at ease knowing they already have a valid championship.

Francisca Russo Cirillo is building a significant lead over her fellow competitors as, notwithstanding today's completely different sailing conditions, she finished in the top-five in all of her races. She is now 17 points ahead of Amanda Ammundsen, and 22 ahead of Juliana Duque from Brazil and Aikaterini Tavoulari from Greece, both tied on 36 points. Anastasiya Krivtsova from Belarus is doing remarkably well and with a bullet in Race 5 she is proving that although Belarus are recent Optimist members, their sailing skills are to be envied.

The leaderboard has changed quite significantly among the boys. Nestor Cano from Spain is now leading the fleet, taking over from Tiago Brito who didn't do well in today's races. Lóránt Péch from Hungary is only 4 points behind Nestor and everything indicates that he might be at the top after a first discard tomorrow when race 6 has been completed. Luka Mati from Croatia is in third place.

Once again the winds are light in Kamien-Pomorski. The fleet went afloat in anticipation of starting race 3 on time but after 2 hours they were sent ashore to wait for the conditions to improve. Unfortunately, although there was a little thermal breeze in the harbour there was nothing on the course area and the race committee have now displayed AP over A. There will be no racing today but there is a new weather system coming through soon and things should improve. Fingers crossed! 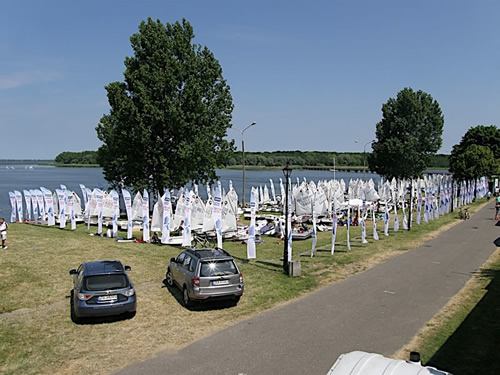 After a postponement in the morning due to lack of wind, the fleets were sent to the water at 1500, when the breeze had finally settled. Each group (boys with 146 sailors and girls with 101) completed two races according to schedule.

The rankings of both fleets show no dominance from any nation, as there are 9 countries represented in the top ten of each group. However, this is still early days in the competition and much can change in the following days. Among the girls, Francesca Russo Cirillo from Italy is in first place after finishing second in both races. Gesa Bornemann from Germany is second and Amanda Ammundsen from Denmark third.

In the boys' fleet, Tiago Brito from Brazil is tied in points with Greek sailor Faidon Beza Florentin, followed closely by Nestor Cano from Spain. 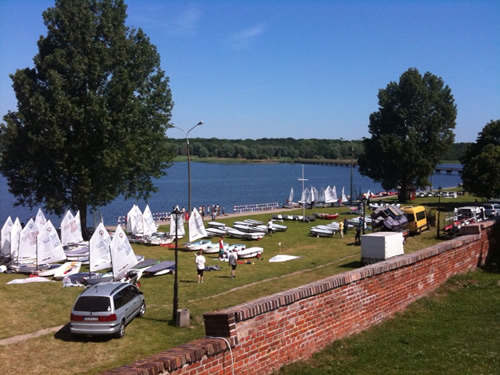 There is only one day to go now to the European Championship which is the second IODA event of this summer season.The official arrival day is tomorrow July 2nd but Kamien Pomorski is already bustling with excited optimist sailors. Located in the north-west part of Poland, the city was historically the capital of West Pomerania and is full of historic sites, including numerous examples of both religious and secular architecture. The sailing conditions are said to be ideal, with winds blowing all year round so expectations are high for a great championship.