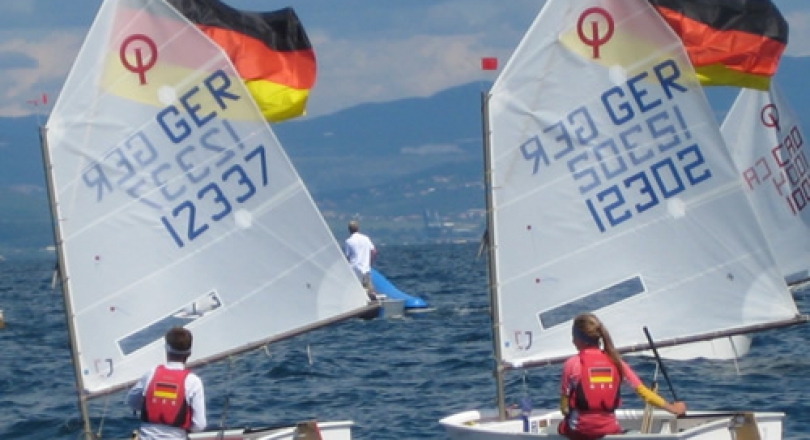 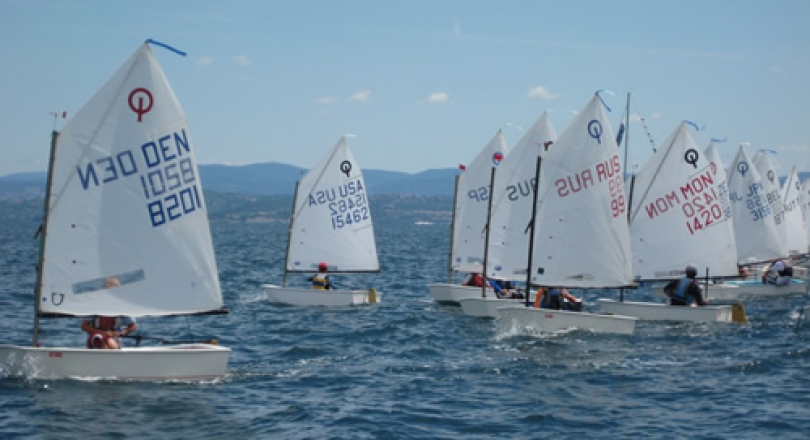 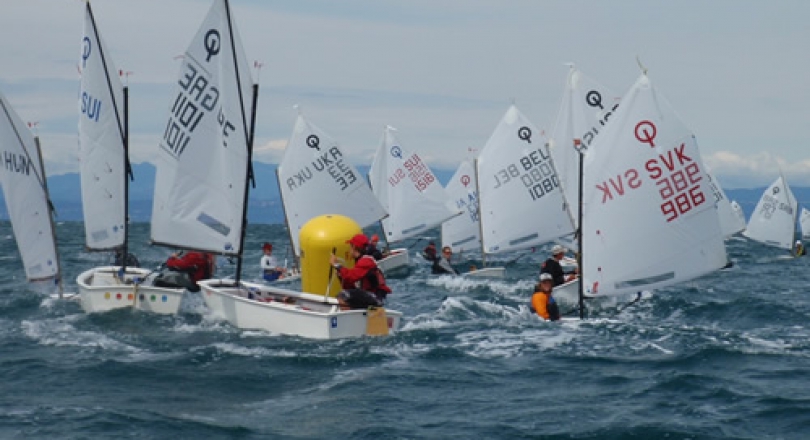 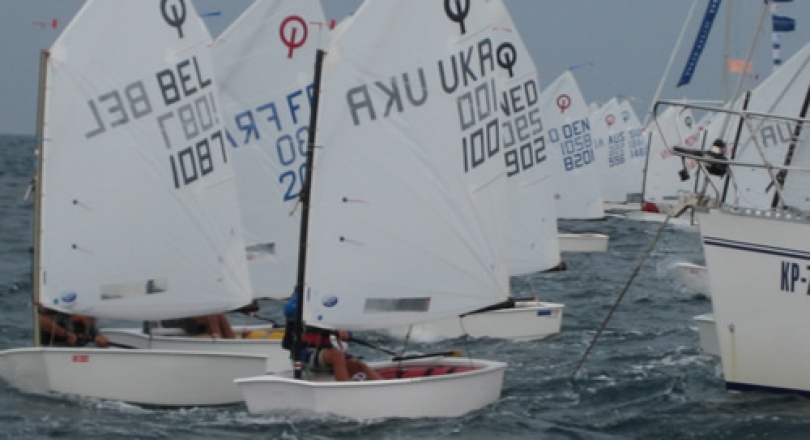 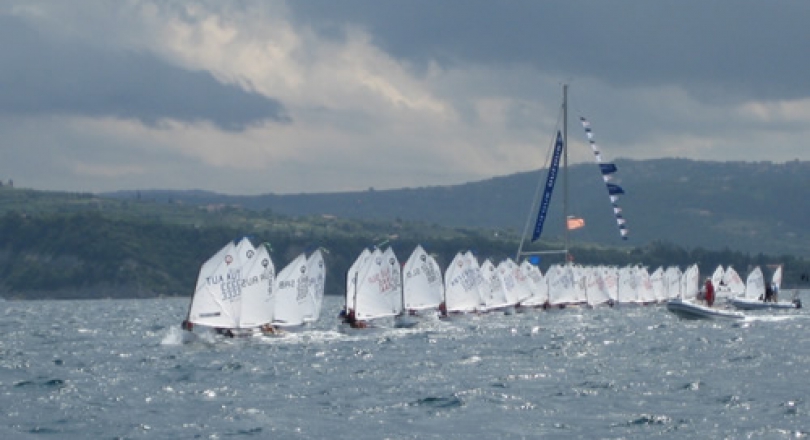 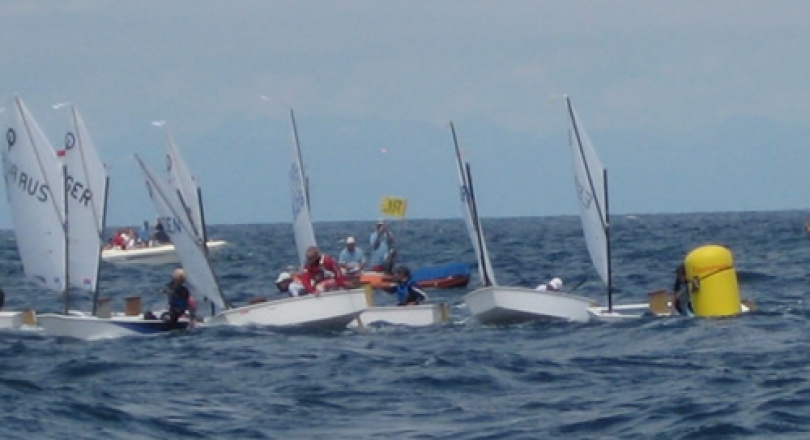 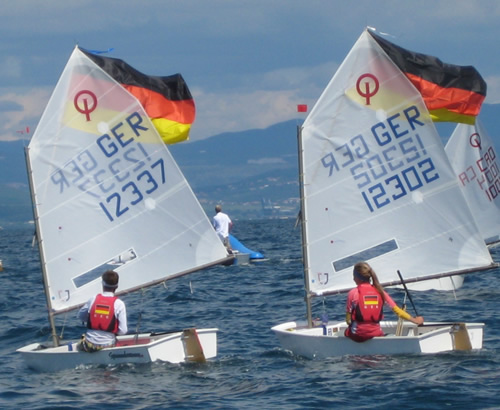 After the start of the first boys group, the wind shifted to the left and Malcolm Lamphere (USA) managed to cross the fleet on port and went on to win the race. 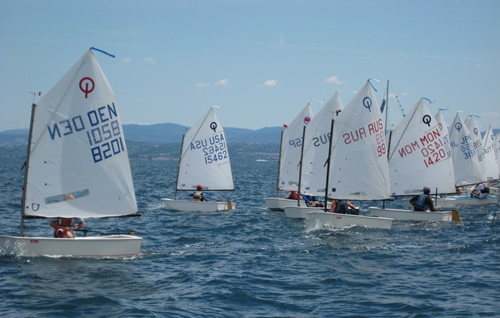 In the second and final race of the day, Slovenia earned another bullet when Toni Vrscaj won his group race. The conditions today were difficult with current and wind shifts playing their part in making the correct tactical decisions. Despite this, the leaders in both fleets, Maximilian Hibler and Paulina Rothlauf remained consistent, maintaining their positions and will tonight be awarded their trophies as European Champions.

Report on prize giving and final results to come tomorrow. 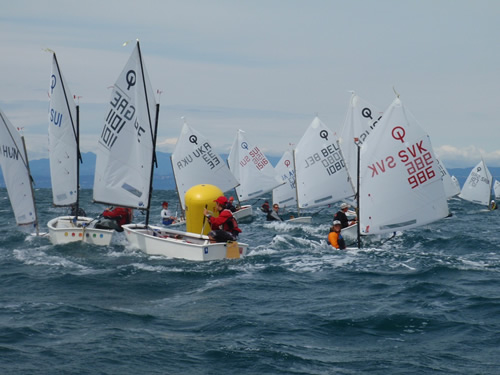 Today saw 16-18 knots of steady Bora wind, half metre swells and sunshine. Hoping not to repeat the numerous recalls of yesterday, the race officer immediately went to black flag for the first start and the fleet got away at the first attempt.

There were three races for each group, all in ideal conditions, making a total of nine races in the championship so far. Paulina Rothlauf and Maximilian Hibler, both from Germany, continue to lead the girls and boys fleets respectively. Lea Janezic won race seven of her group impressively, giving the first win to the home nation and improving her series score to eighth overall.

Tomorrow is the last day and the race committee are hoping that with an early start they may complete another three races. 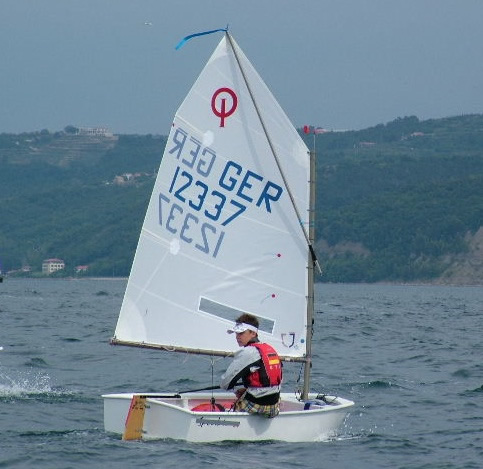 The start of the day looked promising, with the Bora wind still blowing and the sailors were greeted with a a gusty 18 knots and were fully hiked. However, this wind slowly began to drop leaving large swells, which had built up overnight.

There were many attempts to start the first boys group and all the time the wind was decreasing. After the third attempt to start, the race committee flew the black flag and eventually 17 sailors found a BFD added to their score.

Once the two boys fleets were racing, the wind continued to drop and was by now down to just 6 knots and it continued to shift left and this delayed the start of the girls fleets. Laliv Tauber (Israel), is to be congratulated for an excellent start when she attempted to cross the fleet on port tack.

The boats have now completed 6 races, which means that there is now one discard so some sailors have been able to drop a poor result or OCS score. The team from Germany are having an incredible regatta with Paulina Rothlauf, defending her title from last year, ahead in the girls fleet by 5 points from her fellow team member, Annika Matthiesen and Maximilian Hibler leading the boys fleet by 11 points.

There are at least two more races scheduled for tomorrow, the penultimate day of the regatta and there could still be changes to the leader board. 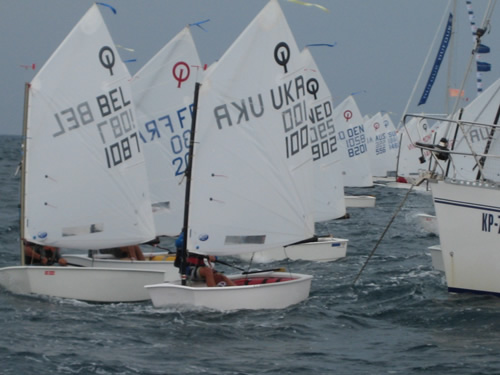 After the difficult conditions of yesterday everyone was hoping for a better day today and their prayers were answered.

Race 3 started on time in about 12 knots of breeze. Blue and Green boys fleet started first and the fleet remained quite tightly bunched until the final leg. Luka Tosic (Serbia) read the shifts well as the wind tracked slowly right and won the race ahead of Kristian Chekh (Russia) and Tanju Okan Mandalinci (Turkey). Silvia Mas (Spain) won the Blue and Green girls fleet having lead for most of the race.

The wind continued to track right to come from the E/NE and strengthened to a steady 16 knots. This was the Adriatic Burja or Bora wind, which brought near perfect sailing conditions for the rest of the day.

After day 3 the German team are in great form, Annika Matthiesen and Paulina Rothlauf are currently in first and second place in the girls fleet and Maximilian Hibler is leading the boys. Lighter winds are expected tomorrow which will continue to provide challenging conditions for the sailors.

The race committee left the beach hoping to have stronger winds than yesterday. Slowly a breeze began to build and the horizon was soon filled with lines of optimist sails as the sailors enjoyed the increasing breeze. The course was soon laid and unlike yesterday, all four starts of race 2 got away without any recalls. The wind had now increased to 12-14 knots and the racing was close and exciting. 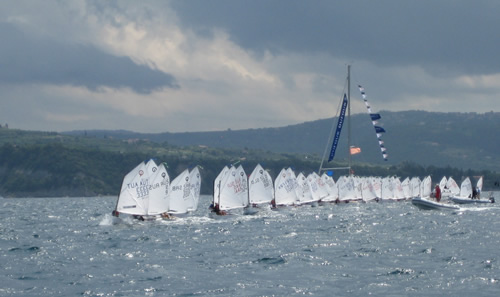 Race 3 began quickly with the intention of trying for three races during the day. With the delayed start this was always going to be a challenge and it began to look even less likely as the wind began to drop to 5-6 knots with frequent shifts. Suddenly, just as the last girls group was starting, the wind became much colder and within 5 minutes was blowing 20 knots with gusts to 25+. The wind continued to increase and the race committee abandoned all races, signalling that all boats should return to shore and racing ended for the day. 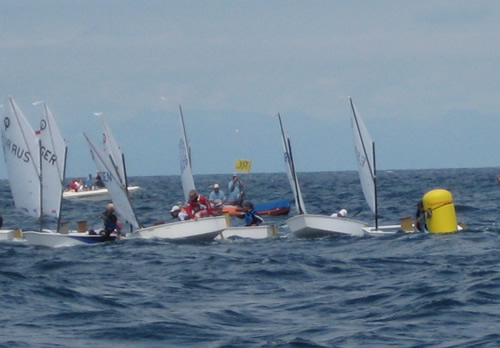 Piran has certainly provided the sailors with a challenge and for many it has been hard to be consistent. However, after two races, Malcolm Lamphere (USA) was leading the boys with a 5th and a 2nd and Jennifer Poret (France) was leading the girls with a 1st and a 3rd