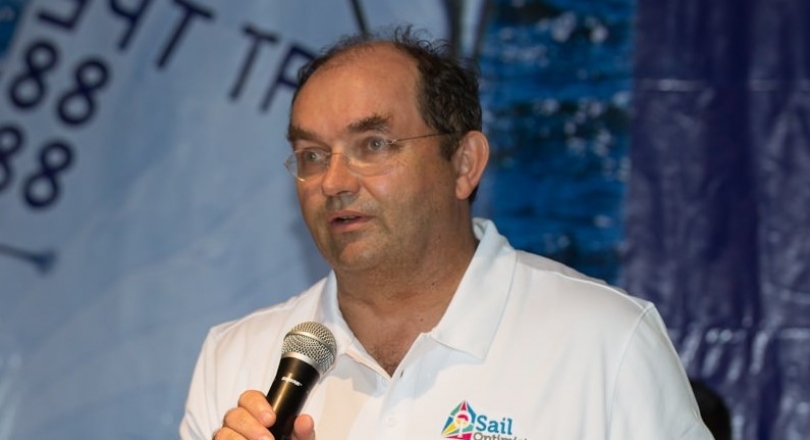 Kevin Whitcraft (THA) was elected as the new President of IODA at the 2017 IODA AGM last week.   Seventy-two countries were in attendance for the AGM and the elections, the largest gathering of Members in many years.

Kevin takes the helm from Peter Barclay who successfully served as President for 10 years (2007 to 2017).  Peter served the maximum number of years (10) as laid out in the IODA Articles.

Kevin brings a fresh new face to IODA.  Although his two sons competed in the Optimist Class when they were young and he travelled with them to many international events, Kevin has not been involved in the Optimist Class in recent years.  It is his passion for the sport of sailing and the role the Optimist plays instilling the love of the sport in so many young sailors around the world that has brought him back to the class.   His two sons Dylan and Don Whitcraft are currently competing in the 49er Class for the Thai National Sailing Team.  Don Whitcraft participated in the 2008 Optimist Worlds in Turkey, 2008 in Brazil and 2010 Malaysia

A successful businessman, Kevin is the Group CEO of RM Asia Group since 2002. The RMA Group has operations in twenty countries globally spanning sales, service and support of motor vehicles, agricultural equipment, construction equipment and power generation equipment. The RMA Group is the largest supplier of vehicles of the United Nations Globally. RMA Automotive is a Ford Approved Quality Control Vehicle Modifier with modification facilities in Thailand, South Africa, Indonesia and Turkey with the capacity to modify in excess of 20,000 vehicles annually.

Married and with two sons, Kevin is an avid sailor having competed on the Thai National sailing team for 6 years.  He is the former Commodore of the Royal Varuna Yacht Club, a Director of the Royal Yacht Racing Association of Thailand and President of the Phuket King’s Cup Regatta.  He currently campaigns his TP 52 around the South East Asia racing circuit.