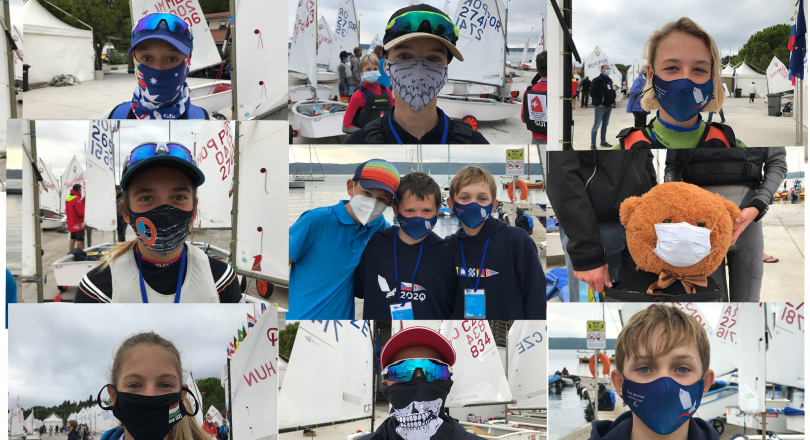 The 2020 Optimist European Championship took place in Portoroz, Slovenia October 18 to 25th. Although the championship closed one day early due to the region of Slovenia turning orange to red, the Championship was successfully completed with 6 qualification races and one race in the finals for the Boys and Girls Gold Fleets.

Taking on the challenge of organizing and hosting this very important IODA Championship during a global pandemic was a huge ask.  Many thanks to the Mitja Margon and his team of dedicated volunteers who pulled off an incredible championship in only four short months.  This Championship was the only IODA event to take place in 2020, so for many of the sailors who were aging out of the class, competing in this event was a highlight of the year.

The European Championship was originally scheduled to be held in Estonia in June.  When Estonia withdrew as the host, the Jadralni Pirat Yacht Club was selected to host the event in October after a bidding process to host the championship took place in June.

The Organizers are to be congratulated for how they implemented their COVID 19 risk mitigation protocols throughout the championship.  The purpose was to create a safe bubble for the sailors, coaches, team managers, volunteers, and technical officials.  It was a model on how to run a championship during these challenging times.

The sailors and their support personnel should also be congratulated for their adherence to the COVID risk mitigation protocols that were put in place to ensure that they were all safe.  The venue was only open to accredited individuals who could enter through 2 gates that were access controlled.    Temperatures were taken and hand sanitizer was applied, and masks were of course mandatory.  Parents and spectators had to stand outside the fenced-in venue.

For those people who could enter the venue, they wore masks of all shapes and sizes.  It was great to see sailors wearing masks that were branded such as the team from Italy. Although it is not much fun to have to wear a mask all day, many of the sailors took mask wearing to a new level.

The success of the championship during the COVID pandemic was a testament to all the COVID risk mitigation protocols that were implemented by the organizers. These could be considered as ‘best practice’ and be implemented for any Optimist event in the future.

In addition to those already mentioned, here are some additional protocols:

Although everyone had to adhere to the COVID risk mitigation protocols not only on the venue but in the hotel accommodations as well, it was a great week of Optimist sailing. Getting together with 269 sailing friends from 34 countries in the only IODA Optimist event in 2020 was a prize all by itself.

After 6 qualifying races and one final race, the top overall finisher was Weka Bhanabandh from THA tied in points with Adriano Cardi Quan from ITA, who took the European Title in the Boys Fleet. He was followed by David Rhode from AUT in second place and Santiago Sesto Cosby from GBR in third.

In the Girls Fleet, the overall winner and European Champion was Rebecca Geiger or ITA followed by teammate Lisa Vucetti in second place.  Third place finisher was Ewa Lewandowska of POL.

To see the full results go to https://2020europeans.optiworld.org/en/default/races/race-resultsall

For other news items go to the Europeans Event Microsite https://2020europeans.optiworld.org/en/default/races/race