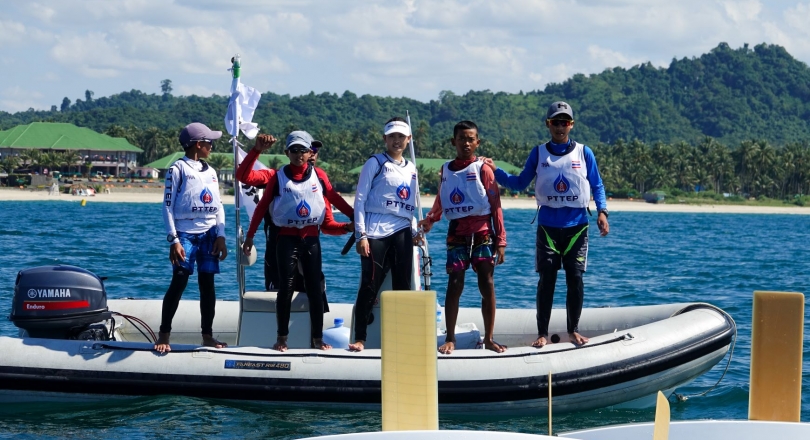 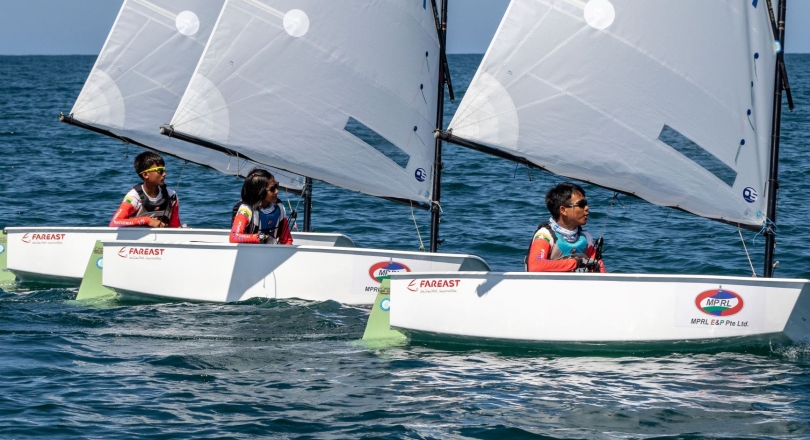 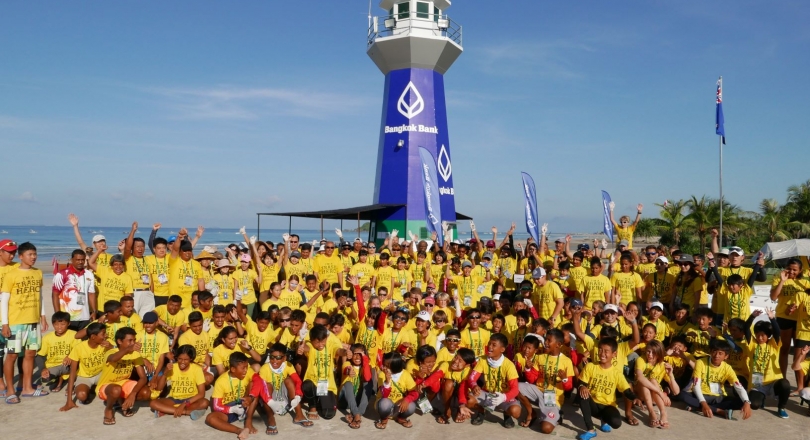 Team spirit was the call to action today at the 2018 Optimist Asian & Oceanian Championship hosted by the Ngwe Saung Yacht Club & Resort in Myanmar.

The day started very early with all the teams and volunteers taking part in a TRASH HERO activity.   It was a sea of yellow shirts in the venue as everyone enthusiastically collected garbage for disposal along the shoreline.  Today everyone was a TRASH HERO Team member!

Shortly afterwards, the 2018 Asian & Oceanian Team Racing Championships took place.  16 teams of four sailors each from THA, AUS, HKG, CHN, JPN, OMA, IND, CAN, USA, NZL, SGP, and host nation MYA battled it out over an 18 race knockout series.   After 12 knockout races there were four teams remaining in the Semi Final – THA1 against THA2 and CHN1 against SGP2.  In an all or nothing race for each pair of teams it was THA1 who ended up competing against CHN 1 for the title.  The losers of the Semi final round THA2 and SGP2 battled it out for third place with SGP2 taking the match.

In the best of three race finals, THA1 won two races against CHN1 in a closely fought final right down to the finish line to take the overall Asian and Oceanian Team Racing Championship.

Following the team racing, the Race Committee took advantage of the excellent sailing conditions to get 2 more fleet races in to complete a 6 race Qualifying series.  After 6 races, the Team from Thailand is dominating the top 10 places taking first to fourth overall. Jedtavee Yongyuennam and Panwa Boonnak are only 1 point apart in first and second and will be battling it out in the finals for the top of the podium. Knipping on their heels are teammates Bowonnan Chanram and Weka Bhanubandh only a few points back.

China’s Gang Siyi is the top girl and is tied with the next two sailors, Patiham Vorrasart of Thailand and teammate Zheng Hongyu of China in points.  Two more girls are standing in the top 10, Chalisa Krittanai of Thailand in 8th and Faith Hailey Toh in 9th.

The finals are set up for tomorrow with the overall fleet being split into Gold and Silver fleets.  The top sailors from both fleets will now get a change to race against one another for the top podium positions.

For results go to: http://2018asianoceanians.optiworld.org/en/default/races/race-resultsall

To view the live race & other information, go to: http://2018asianoceanians.optiworld.org/en/default/races/race